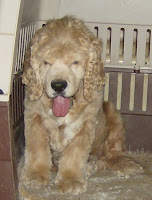 This morning came too soon but I did manage to toss the playful dogs outside for an hour while I went back to bed. After that I gave my old cocker spaniel a shower and discovered that my water pipes have been leaking on to the floor behind the shower for a very long time. I moved the shower curtain behind the pipes to catch the water but that is only a temporary fix.
I went to the pet store with 2 of my dogs but had to leave early after my cocker spaniel would not stop scratching himself. It seems that he was allergic to the shampoo that I used. I bought some coal tar shampoo at the petstore and sent my groomer friend a text to see if she was working. She was so we went over there for a quick bath. My dog is much better now.
After we got home I cleaned, played with the dogs, ate dinner and watched Bones and Rockford Files. I probably should have been fixing my plumbing but I wanted to relax for a while. The weekend is over too quickly.
Posted by Daizy at 9:41 PM

Leo is adorable, I'm glad he is feeling better.