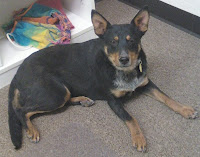 I was about to put my new registration sticker on my truck when I looked at the license plate and decided it was time for a new one. I happen to have one of the defective plates where the top clear layer de-laminates and peels off around the raised numbers and letters. The new plates are all flat so hopefully they won't have that problem.

I went off to the MVD at lunchtime and hoped that it wouldn't take too long(haha). I got my number and sat down, staring at the Now Serving' sign intently. Numbers came up and went away and I waited and waited. While I waited I heard an abnormal amount of bad words from the loud conversations around me. The two "ladies" next to me were discussing who they were dating, had dated and would like to date as well as who was cheating on whom and who they would like to beat up. Nice.

Another young "lady" was getting numerous phone calls from her significant other who was not saying anything nice. There was a lot of whining and crying and then bad words and then pleading and hanging up on the person. This was repeated over and over until the "ladies" sitting next to me got up and moved away from our area. The people behind me decided to play some home movies of what sounded like their children in a school play shouting out the lines in Spanish. I can only think that they were trying to drown out the whining "lady". They guy in front of my with the headphones was very smart. I hope they were the noise cancelling kind.

After an hour of staring at the Now Serving board and the advertisement/gossip screen next to it (Giselle is introducing a new line of flip-flops, oh boy!) my number finally came up and I got my new flat license plate for $5. Another chore off my list. Now I am going to go back in to my own little world and try to block out that hour.

After that I had to go pick up my dog from the vet and then it was back to the office only an hour late. My boss didn't even mention it. Then at 5 I stopped by my rental house and happened to meet some people looking at the house for rent next door. They wanted to see my house too so I gave them the tour. They really liked my house but I was trying to politely tell them that the school district is terrible compared to the one they are coming from. Oh well, maybe they will homeschool.

I'm just glad it is finally Friday.
Posted by Daizy at 9:38 PM