Work Away The Day

It was off to my rental house again today to try to cross some chores off the list. I put up four more roller blinds. It was very frustrating to attach the brackets. Finally I put only one screw, instead of two, in each side and hammered them in. Those screws did not want to go in. I also put up the bamboo shades on the bay window. They are kind of strange because they are see-through. I suppose at night people will be able to see in. Hmm...if I was the renter I would take them down first thing and put up my own curtains. 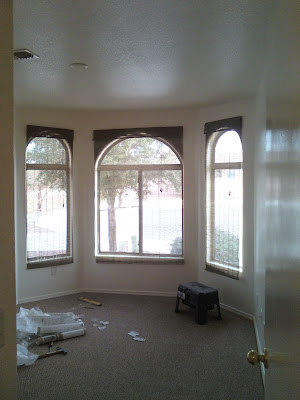 Oh, and yes that is carpet in the picture. I decided to go with carpet in the bedrooms after all. My free tile labor is, well, as one co-workers said, you get what you pay for. I decided that if this house was ever going to be ready to rent again, I needed to speed things up. I almost wish I had just gone with carpet throughout and had it rented already. But no, when the tile is finished it will hopefully last a long time.

I still have to try to shorten the vertical blind that I bought (I bought a hack saw) and if that works I will need to go buy another one vertical blind. Then I will be finished with the window coverings.

I also worked on the backyard. I cut back the shrubs that die off every year and pruned the others. 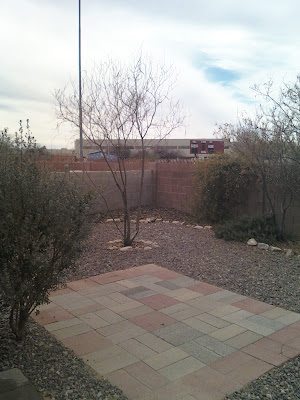 Because of the holiday on Monday, trash service was off by a day so I was able to fill the can and get it out to the street in time. Good thing I did because I have more cuttings that wouldn't fit so I'll need to put them out next week. The drip system had a few holes but I was able to patch them without too much trouble. The worst hole was in the pipe that I buried. I didn't have a shovel so I had to dig with my hands. I brought a dog along but she didn't help. She just watched and wanted to sit in the hole. Funny dog. 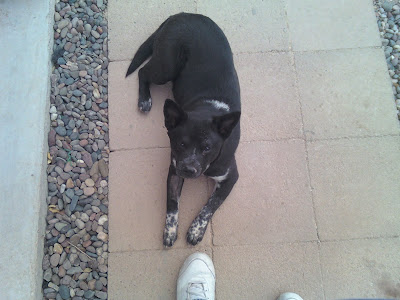 Some people came to see her to see if they wanted to adopt her but they haven't called back so I am guessing that's a no.

I also put batteries in four of the smoke detectors and put them back up. The other two will require a ladder. I need a lighter ladder. Mine is sooo heavy. I tried to put the closet doors back on but that is going to take some practice. Maybe I will try again tomorrow. 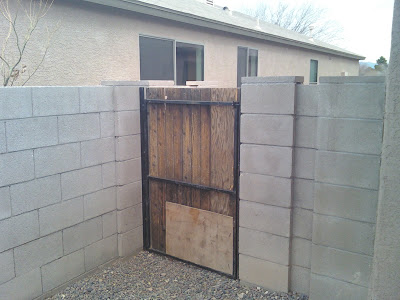 These little things seem to go on forever. I will be SO glad when it is done and rented again. I really do prefer when money is coming in, not draining out like water in a bathtub. Oh, that reminds me. I need some Draino.

I love your patio made from pavers!! Did you do it yourself?

It's a bummer that your previous renter didn't let you know when all of these little repairs were needing attention while she lived there. Maybe this time around you can ask your new renters to let you know of little things on a regular basis, that way when the house is empty, you have less to do.

Petunia, yes I did do it when I was living there back in 2006. I had a lot of fun landscaping the backyard. Hauling those rocks was a big chore!

Kim, I think my renter was afraid to complain because she owed me money. A few things were broken from the renter before and repaired too quickly (like the handle on the toilet)and broke again. Little things like the broken drain plug would have driven me crazy if i had lived there. But the last renter didn't even care that all of the smoke alarms were doing the low battery chirp. I could not have lived with that noise!