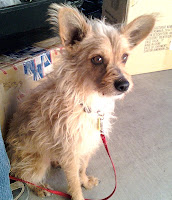 The dogs and I had a nice Christmas Eve at home only interrupted by one meeting across town with a nice couple who were interested in my Houdini dog. If it was any other dog I might have said I was busy but since I am going out of town for a short time, he would have to stay in a crate which he hates. I took Houdini and another dog just in case they wanted another choice. They liked Houdini even after I told them about his fence jumping. They promised to keep him indoors. I am so happy that he found a home before I left. And these people don't have any other animals which is perfect for him. He can be the king of the house.

That also meant that I did not have to go buy a door for my bathroom although I had kind of decided not to do that plan because it was cold last night and I didn't want to be heating 2 rooms. Plus if he was in a room with a heater he might knock it over or chew the cord and that would be very bad. If they do return him I hope that one of the other rescue people will dog-sit until I come back.

I must say that having only 5 dogs makes the house seem empty. I actually took them for a walk today, something I haven't done in months because I had too many.

It was a nice relaxing day and I didn't do laundry even though I got around 200 gallons of water from that last storm. I decided that I can do laundry at my sister's house. Instead I slept in, cleaned, took a nap with the dogs, watched Stargate, surfed the internet, got Houdini adopted, added bleach to my water tanks, picked out some clothes to pack, dyed my hair, and now I am watching Stargate again while hanging out with the dogs. I need a whole month of days like this.
Posted by Daizy at 7:50 PM

Getting new parents for Houdini is a great Christmas present. I hope they love him and keep him safe.
Have a lovely time with your family over Christmas. A few days of just chilling and you wont know yourself.
Lizzie

So far no "he escaped" call so this is good.

On behalf of all us anonymous posters, Merry Christmas!

Merry Christmas to you Anonymous!