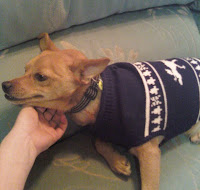 While I was shopping at Big Lots on Saturday I saw this cute dog sweater. Now, I have never bought dog clothes before but my sister has a similar dog and she just bought him a sweater. I also noticed on my foster dog's pound papers, his intake picture shows him wearing a sweater. Of course the pound just throws that sort of stuff away but I thought I would get him a new one.

My phone rang while I was shopping and it was a person who had adopted on of our dogs but it wasn't working out (high energy dog, killed all of their chickens) so they wanted to trade for my dog. The dog that they mentioned was my big chow chow mix. I got home, put a load of laundry in the dryer, got ready for my office dinner and got my chow chow in the car. I looked at my pants and they were covered in dog hair so I decided to just wear jeans. The office dinner was at a steakhouse anyway. I started driving down the driveway and called the people that I was supposed to meet to trade dogs. I asked them if they realised that my chow chow was much bigger than the dog they were trading. They seemed unsure of trading for a big dog so I asked if they were looking for a lap dog and they said yes. I told them about my newest dog and they were very interested so I turned around and put my chow chow back and got the new dog. I met the people across town and traded dogs. My dog put his little paws on the lady's leg and let her pet his head. I think they will like him. They took off his sweater and said they would buy him a new sweater. So now I have a sweater without a dog. You know what that means right? I need a new dog to fit my sweater!

After that I delivered the traded dog to his previous foster home and went on my way to my office dinner. It was a nice dinner. I ordered the most expensive steak on the menu...the Porterhouse because the boss was paying. I figured I could eat steak all week and then the dogs can have fun with the bones. Guess what I had for lunch today? That's right. Steak.

After the dinner I had to drive an hour to get home and then switched the laundry around so that I only had one wet load of laundry in the morning.

It was a very long day but quite productive too. Then on Sunday I dug a hole in the dog run and put in a stake for my fence. I still need to add some sort of gate. I should get that finished next weekend. I wish the weekend had been longer. I was doing so many chores that I had put off and it was great.
Posted by Daizy at 8:47 PM

Try putting the sweater on the cat! She would probably rip your arms off but if you succeeded it would look pretty cute.

Ah ha! I think I will pass on that. I need my arms!