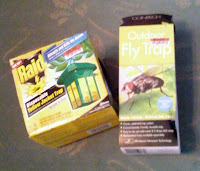 The dogs woke me up at 6 again, actually, it is only one dog that starts whining at 6. I thought I would go back to sleep in the RV but ended up making waffles because I had milk and eggs available. I made extras too and froze them. Then I started getting ready to go to the adoption event. Usually I don't leave enough time and I am late. I was sure there were going to be a lot of people there and I didn't want to be the last one so I started early and got there 20 minutes before noon. That worked out well because there was only one guy there setting up with his 3 dogs. I babysat his dogs while he set up the kennels and then a few more people showed up. My dog got a lot of attention and in less than an hour a lady adopted her. After that I had the afternoon free so I went to Big Lots on the way home and stocked up on leashes and collars again (since I had just given away another leash and collar). Oh, and I found a yellow jacket trap for $5 and a fly trap for $3. Let's see if the store bought kind work better than mine.

The dog that got adopted was very calm and well behaved. That leaves me with 2 more fosters who are a little more feisty. Hopefully they will get adopted soon too. I will try to resist the sad puppies on the rescue list for as long as I can. Four dogs are manageable for now.

After I got home I made some food for lunch and some extra for the week's lunches. I even made brownies in the toaster oven. It is a little tricky to get them to cook even and not burn but I managed it and boy were they good with a cold glass of milk.
Posted by Daizy at 6:25 PM

Hi Daizy
Just back from hols and catching p on the news. Hope you nose is mending okay. My dad had two lots of majorish surgery on his face and you cant see it at all now so am pretty sure you will be properly mended shortly. He is 82 and you must be younger! I saw fly traps the same as your soda bottle ones in Greece. They used coke but it seemed to work. I missed the donate button. Could you not have a paypal account with a donate button all the time for use doggy people to help you out?
Lizzie

Hi Lizzie, hope you had fun! My nose is looking pretty good. I don't think any more surgery will be needed, at least not for that spot. I should put more soda in my fly traps. They are starting to work now, well, if you consider 2 flies and 1 wasp "working". I put the donate button at the bottom of the right side column so it is still there just not on top anymore.

doh, its because i was using a reader. Must try harder!
Lizzie

Thanks so much Lizzie, I, and the doggies, certainly appreciate it!