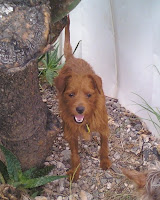 I got up early this morning because I had to take my two foster dogs to the spay/neuter clinic at 7am. My day was timed perfectly. Drop them off at 7, get to work 1/2 hour early, have the dog rescue lady pick them up for me and bring them to work at 4:30, then leave 1/2 hour early and take them home.

I got to the clinic and they didn't have my appointment scheduled. I thought that was odd. He looked and looked and finally I rescheduled for next week. When I got the dogs back in the truck I decided to see if the phone number that I had called last week to make the appointment was the same phone number on the paperwork that he just gave me. They were different. I called the number and got a recorded message for a different clinic across town. Bummer.

After calling work to tell them I would be late and getting directions to the clinic, I made it there just before 8 and dragged the dogs in. Luckily I made it in time. 30 more minutes and I was back in my truck driving to work, only an hour late. That was ok though because my dogs were going to be picked up and delivered to me and maybe she could stall until 5.

4 o'clock came around and she called in a panic. She had picked up my dogs for me but lost one of her other dogs when he jumped out of her car and took off down the road. So I left work at 4 and got my dogs while she was frantically running up and down the street. I drove around the block a few times to look but then headed home. She called me soon after to say she caught him again so I was relieved.

I ended up missing two hours of work. Guess I have to go in early tomorrow. At least my foster dogs can be advertised for adoption now that they are fixed. It is time for them to move on so I can save some new ones.
Posted by Daizy at 7:46 PM