I was at the grocery store around noon buying dog food (of course), milk and fruit for the week when I saw an older gentleman with his hood up parked across from me. I thought that his battery had died but when I walked around the open car door I saw that he had one of those air compressors that hooks to the battery. I figured that he had it under control but decided to ask anyway. He said he hoped it held air "this time". That made me think that he had tried filling the tire more than once. I looked at the tire and saw something that looked like duct tape. The man unhooked the air compressor and I could hear the tire hiss. I don't think he could hear it. I inspected the "tape" further and, you guessed it, it wasn't tape. It was a 2 inch piece of metal. Neither he nor I wanted to change a tire in 90 degree heat so he borrowed my cell phone and called AAA. Amazingly, the tow truck showed up in under 10 minutes. I think that was a record. Anyway, I was glad that I could help him out (even if it was just with my cell phone). After all of my battery trouble, I known how annoying it is to be stuck like that.

Well, it's August. Fall is right around the corner. The weather was quite nice this week. Rain and low 90's. It made me remember how nice it is to be able to work outside without dying of heat stroke. I filled up my jacuzzi with water which leaves 250 gallons available for rainwater this week. I saw another water tank on craig's list and I really wanted it but then I thought that I probably have enough tanks for now. I think I can hold off on buying more tanks until next year. 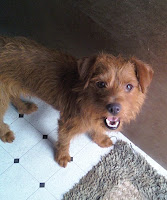 So far the only chore I have this week is to take my two foster dogs for their spay/neuter appointment on Tuesday. Then we can start advertising them for adoption so I can rescue some more. The rescue list at the pound has around 30 dogs on it and last week they killed off 9 for lack of room. It is sad that they can't all be saved but I will keep trying one at a time (or two at a time since I currently have two).
Posted by Daizy at 5:43 PM