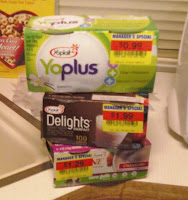 It was a very quiet day at work. I found out later that the phones were down so no one could call me. How convenient for me. Then at 3pm our computer system went down. Most of the people left at 4 but I hung around until 4:30 when the last of us gave up and went home. Because I had a little extra time I stopped at the grocery store for a watermelon. 136 dollars later, I had a truck full of groceries and was feeling a little guilty about spending so much. Some of it was clearly recreational shopping, some was wanting to take advantage of good deals and some was wanting to stock up so I wouldn't have to come back any time soon.

One thing that I don't like about electronic coupons is that I couldn't remember what my coupon was for. I knew it was for some kind of Yoplait yogurt. Turns out it was for 2 containers of Yoplait FiberOne, and 2 containers of Yoplait Delights. I could have gotten a much better deal if I had purchased 2. Oh well, maybe I will try them both tomorrow and if I like them I can go back and use my coupon. With the Manager's discount(they are marked down so they can get rid of them fast) they should be very cheap. Or maybe I won't like them and then I just saved myself from suffering through 2 whole packages.

The biggest disappointment was that the watermelon isn't that good. At least it only cost $2.50 but still, it was the whole reason that I went to the store.
Posted by Daizy at 8:48 PM