Wrap-Up For The Week 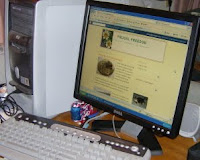 What a crazy week that was. After my computer decided to be uncooperative I ordered a Netbook. Then someone asked why I didn't replace the hard drive in my old computer. I found a hard drive online for only $40 and asked a computer technician and, of course, they didn't recommend putting any money in to an ancient machine.

So I go the bright idea to look on craig's list. I saw an old machine for $30. Use it for email and internet, the ad said. I called and the guy dropped it off at my office after lunch. I knew it was a gamble but was hoping it would work out. I got it home and hooked up. It's as old as my machine. It connected to the internet and I was happy. Then I noticed a little key icon in the corner. I clicked on it and it said I had 29 more days to register my copy of Windows XP. It seems this guy gets old Windows ME machines and sticks the 30 day trial of XP on there. Well, I do own a copy of XP. I did some research on the internet. Everyone online said that it can only be installed on one computer, although a coworker insisted that it could be installed on 2 computers. The online people said, if you want to put it on another computer, say, if your computer dies, then you can call Microsoft and they might give you a new activation code. I say "might" because I found some people who said yes and some say no. It must depend on how the customer service person is feeling that day. Also, it is very very hard to talk to a human. Support for XP is very small and soon to be extinct.

So, in 29 days I will install my copy of XP and try to contact a human. If that fails, I might try installing Linux which is free or at least cheap. I was reading the tutorial today and it looks like I would have to buy the CDs because I don't have a CD burner. I will see how much effort I want to put in to it. My Netbook will be here Monday and I might be thrilled with it. The only reason I wanted an old machine is so that I could use my old printer a little bit longer...just another year or so. Oh, and my old computer started working again. I know, I don't understand it. I am using it right now and it's fine. It's like it had a little tantrum or something. Maybe I wasn't giving it enough attention. The Netbook will be much easier to use in the mobile home I hope. No cords for the dogs to chew. I bought a wireless modem off ebay. I hope it all works together without too much hassle. I am tired of computer drama.
Posted by Daizy at 7:13 PM

Hope you get it all sorted out. The netbook should be nice.

so now you have three computers? One for the mobile home, one for the RV and one that actually works. Great going on the 'house' work by the way. I will miss your Mum & Dad when they go!
Lizzie

The Netbook will be a nice surprise on Monday. That's good, I need a reason to get out of bed on Monday.

Yes lizzie, I have 2 and one on the way. If I got another monitor I could hook them all up.

If your old computer(s) can boot from a usb drive, you might try PenDriveLinux.com They claim to be able to install Linux to a usb stick from Windows without using a CD.

When asked which distribution to install, you could select a version of Linux made especially for older computers, such as DSL Linux.

Thanks Michael, that's good to know.