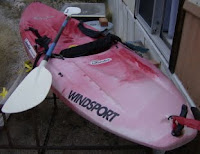 I got up this morning when the dogs woke me up. Two dogs make the other dog sleep on the pillow on the floor and she was up early, whining at the foot of my bed for attention. I gave them food, went to the RV to use the bathroom then went back to the mobile home to see if I could get more sleep. The dogs were in a cuddling mood but not a sleeping mood. They just wanted to have their ears scratched.

I finally gave up on the sleeping and went back to the RV. The friend who was going to buy my kayak said that he would be by around 2 so I thought I had plenty of time. I thought about taking my dog to the dog park but it was cloudy and windy and cold so I went back to bed in the RV without the dogs. The phone rang at 9:30 and it was my friend saying he was on his way over. Great...he was early. I jumped out of bed, got ready. I had time to either go dust off the kayak or eat breakfast. I opted for breakfast but he still arrived before I could sit down and eat. At least he did buy the kayak and I have my $250 for my mortgage. That money was in my plan already I've just been waiting for him to get out here and pick the kayak up.

After that I ate breakfast and looked over my taxes again on the TaxAct site. I put in the information from last years tax return and it looks like I may be getting $200 back. That is great since I thought I was going to owe about that much. 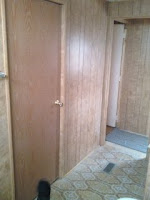 Then I tried to do some cleaning in the mobile home. I swept the floor and cleaned some of the dust. I moved the door from one doorway in the bathroom to the other side. It worked out really well. The door fits perfectly, of course, because it was an original door. Actually, it was the only door in the whole place when I bought the property. I switched the hinges and had to chisel out 1/8 inch of the door latch so that it closed properly. I should have thought of moving that door sooner!

Then I put up a row of 4 hooks to hang my leashes. They were getting tangled and if I leave them where the dogs can get them they get chewed. I also did a load of laundry, filled up my water tank because it is supposed to rain tonight and tomorrow, made a half batch of chocolate chip cookies and baked 6 cookies in the toaster oven, cooked enough chicken to last all next week, did the dishes and took my dog for a walk to practice sitting on command (not just for treat in the house).

I didn't think I did much today but when I write it all out it was a very productive day. Tomorrow I need to focus on cleaning the RV and washing doggy blankets and towels. Hopefully the rain doesn't make things too miserable but I am already thinking that my nicely swept floors are going to be muddy again tomorrow. Oh well. I'll just sweep them again.
Posted by Daizy at 8:46 PM

It doe sound all very productive!
I think once you accept that housework is never finished it makes it a lot less of a pain.
Lizzie

you finally sell the kayak and now it is going to rain for two days in a row? you could have raced the rapids down your ravine! :p

Yes, Lizzie, it is never finished. I wish my cleaning would last more than one day. Too much to ask from the dogs though.

Over the Cubicle, it didn't rain that much. Just enough to get everything muddy.