I went over to the mobile home at 6:30am to take the puppies for a walk. I started up the stairs and THIS caught my eye: 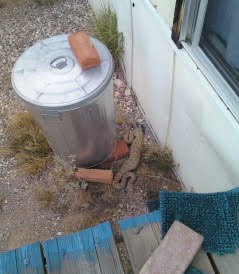 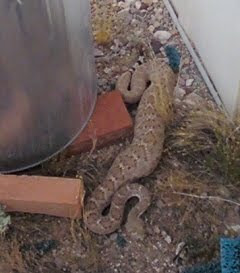 I stood there on the stairs, frozen, trying to figure out the snake's striking range. It looked like it had just eaten a rabbit so I was pretty sure it couldn't get me on the stairs. Problem was, I needed to take the puppies out that door and they are pretty wild on their leashes. I threw some rocks at it and it curled up under the trash can.

I gathered up the puppies and kept their leashes short. We managed to get out and go for our walk without incident. Then I came back to the RV and looked up Western Diamondback rattlesnakes on the internet. There wasn't a lot of information on what to do with one, just basic facts about their biology. I remembered reading about fire departments coming out to remove snakes so I called the closest one. They looked up my address and determined I was just out of the fire district. I knew that, I was just hoping they were bored. They said it would cost $100 to come out but that private companies would do it for cheaper.

So, being frugal (and a lot stupid) I attempted to corral the snake myself. The snake did not appreciate my poking and would not cooperate and get in my plastic bin. I gave up and searched the internet again. I managed to find Santa Rita Snake Removal which services my area. I called and he said he charges $25 but it would take him an hour to get here. I went back outside, with my hat this time, found the snake and watched him to make sure he didn't go under the mobile home. The dog run is on the other side of the mobile home and I don't want the puppies to mess with a snake. Also, he had moved behind my water tank and I didn't want any surprises next time I went to fill my RV water tank. It would be great if I could put him on a leash and let him eat all of the pack rats in my garage.

After an hour of staring at a rattlesnake, the snake guy showed up and quickly caught it with his snake grabber (I need one of those!) and put it in his bucket. 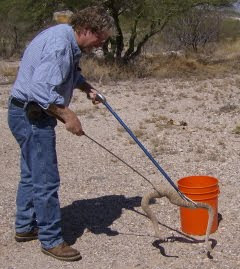 He said that he will take it to the local state park. The park rangers actually request that he bring snakes to them because hikers complain that they don't get to see any snakes. Crazy people. I'll be glad when October is here and the snakes go to sleep. Kind of makes me not want to go outside until then. Oh well, another $25 gone from the budget. It was worth it though.
Posted by Daizy at 11:26 AM

I tend to like snakes, but not rattlers. That one looks pretty full.

Yikes! Glad he was able to relocate it without anyone getting injured.

Over the Cubicle, is paying someone to take the snake the same as giving it away? I have fallen behind on my decluttering. Maybe the snake counts!

Frugalchick, it took him about 1 minute to put the snake in the bucket. $25 a minute. Not a bad job! I wasted 3 hours trying to corral the thing. I am very glad it was too full to strike at me.

Isn't it amazing when someone comes along and shows how efficiently something can be accomplished with exactly the right tools? The photos are great. Glad to hear the snake wasn't killed just for being a snake.

Popular Girl, I tried a kayak paddle and a shovel with no luck, for $130 I could have a snake grabber of my own! Tempting...but then what would I do with the snake? I thought it would be hypocritical to kill the snake after complaining so much about pack rats and mice. Plus, I'm too squeamish for that.

I could never even attempt to corral it. My hats off to you for dealing with a bad (wild animal!) situation humanely and calmly.

Thanks Barb, I must have watched too many nature shows. They make it look easy. But without the right tools its dangerous!

Wow I would have flipped out! I can't believe the fire department was trying to charge you $100. What a rip off. Dare I ask what happens if there is a fire at your place if you live outside of the district? I'm glad you got rid of the snake though.

Sallie's Niece, I was thinking that too. I guess if there is a fire I get a bill in the mail? Bummer. Sorry your house burned down, here's your bill.

I'm terrified of snakes, and while I live in an area with no dangerous snakes (hooray for living in the north!), I still fear the little ones we get.

I don't think I would've left the house until the snake was gone...you're braver than me!

What an adventure!!! That sounded like a good bargain to get the wrangler (wow guess they don't have them in my area) instead.

Beth, I wanted to stay in the house until it was gone but the thought of not knowing where it went was even more scary! I didn't want to meet him again.

rinter, I was really lucky to find that guy. $25 for a snake show in my very own yard!

google "how to catch a rattlesnake" and you're good to go.

bugbear, I just tried it because you suggested it. EHow said use a professional snake hook or tongs. Ha! That's funny. I was wishing really hard that one of those would materialize but they didn't. Then I tried to think of how I could improvise but the time for that is NOT when there is a snake there already. I really want to buy some snake tongs. I wonder what catagory that would fall under in my budget? Entertainment?

Would fireplace tongs have worked? I'm afraid I would be too freaked out to try...at first...until curiousity overcame me...

Big Sis, fireplace tongs are not long enough for me. Maybe 2x the length...or 3x. And the super-duper snake tongs have padded rubber so the angry snake can't slither out. You try them on your next snake and tell me how it works. :)