The Mother Of Invention

Necessity is the mother of invention they say. Desperation is even better. Tomorrow some people promised to help me put the chain link on my dog run. Last weekend they had something else to do and didn't show up. This time I'm not waiting around. They aren't the ones who have to clean the bathroom if the puppies have an accident. I don't want to have to lock the puppies in the bathroom for another week if I don't get the dog run finished. 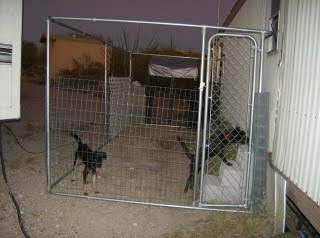 I used the 4'x4' cage, the blocks, and the collapsible cage to block one side. Then I had a sheet of plastic trellis and a roll of field wire and wired it all to the dog run frame. I blocked any holes with more wire. Then I blocked off the end of the hallway and the other bedroom so that the puppies have access to the bathroom and hallway.

The puppies thought it was great to get out of the bathroom. They ran in and out of the door, sniffing at everything. Ok, so they still wanted out of the dog run but at least I feel better now that they have access to the outside.
Posted by Daizy at 8:13 PM

Looks like the pups have their own cubicle now. I am sure that they appreciate the new level of freedom.

Ha, that's funny. I'm already thinking about their next cubicle. One of them's a barker. Perhaps a block fence would be better.

Thanks Lizzie, I hope it holds them in. One of them is pretty aggressive on the wire fence and I've seen her try to jump over. It certainly isn't a long term fix.