All You Have To Do Is Ask 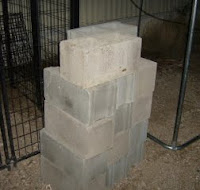 I mentioned to a friend that I planned to line the perimeter of my dog run with cinder blocks. I hope this will help to keep the dogs in if they try to dig and it might deter the neighbor's dog for at least 5 minutes. If that doesn't work I might have to dig down, set them in concrete and chain the dog run to it.

Anyway, she mentioned that her husband had a bunch of blocks left over from a project. She forgot to ask him yesterday so she called him today and wouldn't you know it? He had just finished moving the blocks to the end of the street with a Free Blocks sign. She convinced him to retrieve them and I went over there after work and picked them up.

He gave me 14 blocks. I estimate that I need 25. This is great because there is no way that 25 blocks would have fit in my truck if I had to buy them at Lowe's. And since Lowe's is 35 minutes away, 2 trips would have taken a lot of time and gas. Now I have more than half of the block that I need for free, I only have to make one trip to Lowe's, and he has more space in his yard. Such a deal!
Posted by Daizy at 8:03 PM

It is nice when things work out for everyone like that. Try freecycle for the rest. People seem to always have a few left over from a project.

I have a bunch of blocks you can have. They look like these:
http://www.rexvault.com/LocBlocks%20001.jpg

Over The Cubicle, I'm burned out on craig's list and freecycle. It takes so much time to call people, find someone who still has the stuff, get directions, drive there (usually on the other side of town) and it usually takes a couple of days to coordinate. I have noticed that freecycle has about a 5 wanted to 1 offer ratio lately. Someone just put a wanted-cinder blocks post up yesterday. I have to be in a patient mood and I am not in one now.

They are pretty heavy. I have about 60 or so... My wife wants them gone. I live in Rita Ranch. Come and get them... Free. These are the ones they have at Home Depot for building planters and short retaining walls (they have the lip on the back). I'm guessing weight is ~20 lbs each.

Thanks Mark, that would be great! Send me an email at tucsondaizygirl at gmail dot com.

sent you an email about the blocks.