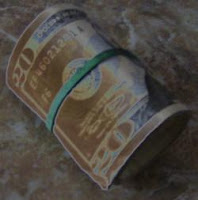 My first checking account was with a local bank. I was quickly introduced to their many fees and basically no benefits except that I thought their checks looked cool. They had sea shells on them. After a few months I joined the credit union where my parents belonged. I am still a member even though it is in a different state. Their member benefits are based on either the amount of money I keep with them or my length of membership. After 20 years I can be a 'premier member'. I thought I joined when I was 17 so I called the bank today to see how long I have been a member. I must be close to that 20 year mark. The woman made me tell her all of my secret info and passwords before she would tell me this top secret information. Then she said I had been a member since 1993. 1993! I couldn't figure out why they said 1993. That wasn't when I joined. It was more like 1989. Then I realised that I turned 21 in 1993. I was probably attached to my parent's accounts until I turned 21.

Well, that is disappointing. I thought I could stay at the credit union fee-free because I was going to be a 20 year member. I still can be fee-free if I have direct deposit or over $5k in my account. The $5k CD I have with them matures in September and their rates are sad. 1.83% for a 1 year CD. I don't want to keep my money there. Ally Bank and Discover Bank both have 1 year CDs for 2.3%. Other than sentimental reasons I can't think of any reason to stay with the credit union. I am sure that the credit union hold no sentimental feelings towards me so when my CD comes out I think I will close out my accounts. It is the end of a 20 year relationship with them. I'll move everything over to Chase. I like that Chase lets me send checks electronically through their on-line bill pay. Chase CD rates are horrible but I will go with an on-line bank for that.

I have a few months to think about it before September but so far I can't think of any benefit in staying with them. They aren't local, their rates are low, and I don't need a loan. Good bye credit union. It is time for me to move on.
Posted by Daizy at 6:28 PM

I like my credit union, but their rates are also horrible so I keep most of my cash in an online bank. My checks are pretty plain. No seashells or anything.

Since you have been with the credit union so long, you might want to tell them you are thinking of leaving and why. Maybe they can suggest a way to make your relationship with them more valuable.

That's a good idea Anonymous. I can't think of a reason to stay but maybe they can offer something I haven't considered yet.

Over the Cubicle, I kept my seashell checks long after I closed that account just because I thought they were pretty. I have always been a pack rat. I think it's genetic.

Thanks Anonymous, I edited that extra 8 out.