End Of The Year Clean-Up 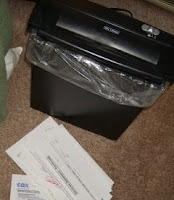 I was one of the few people working in our office this week. Since very few people were calling or emailing, we used our time to get organised which resulted in a lot of paper that needed to be shredded. I liked shredding paper so much I started shredding every one's paper for them. Shredding is fun because it doesn't involve much thought or input/approval/group meetings and I can see my progress. Oh, and there is a definite end to the job unlike most of my other duties which seem to be endless. I shredded so much paper that the machine over-heated and I had to take an hour break for every 15 minutes of use until the poor thing cooled down. 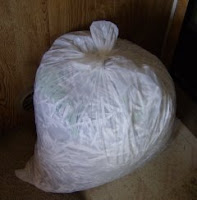 Anyway, when I came home I decided that I should clean out my own files. I pulled out old credit card and bank statements from all the way back to 2005. My little shredder was going well until it began to jam up. It took a little bit of coaxing with a screwdriver and a knife but I was able to shred the whole pile. Now my files are much neater and ready for another year of financial documents.
Posted by Daizy at 6:15 PM

I think you said it well. Shredding is finite, and just about mindless. Work should be like that sometimes.

Also, there is just something cool about the piles of paper shreds it produces.

Yes, I thought about filling the dumpster and then jumping in...but I resisted the urge :)

I love shredding too, but I never mentioned it as I thought it kind of weird! Nice to know I am not weird alone. We have confidential waste disposal at work, so only salary info get shredded. Boo!
Lizzie

Hi there-well done indeed, I'm sure I need to get cracking on this too! Happy New year!

Hi Lizzie, welcome to the secret society for shredder-lovers! I wonder if it is an addiction or an affliction...hmmm.

Hi Sharon Rose! You can join our secret society too! It is a great feeling when all of the paperwork is organised again.