Meeting More Neighbors And Getting More Chores Too 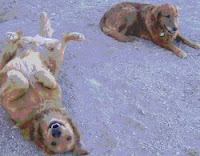 When I wanted to have the road graded I put up a sign for the neighbors to see with my phone number and a note. I asked if anyone wanted to help pay for the grading since it was going to cost $240. One neighbor did respond. I hadn't met him before since he just bought the house last year. He is a very nice man who lives with his grown daughter.

Anyway, last weekend they called me to invite me over because another neighbor gave him some money for the road and he wanted to give me my share. So, I went over and chatted with them and saw their house, which is very nice. And then they told me they were going out of town this week and since I am a cat person they asked if I could check on their cats. I thought that it was surprising that they handed over their house key to me since they had just met me. I think they did some checking on the Internet. The gentleman asked me if I was interested in genealogy and I said not really, and he said that he found someone with my name who asked a question on a genealogy site. Ah, yes, I did ask a question on that site about 5 years ago! They must have found my name from the online tax records and then did a search for me on the Internet. Wow, they are as sneaky as I am. When I first moved out here I looked up all of my neighbors on the online property tax records to find their names and then looked to see if they were in the Arizona court records. Some of them were. I thought it was really funny that someone did it to me!
Anyway, now I have more new friends and I'm baby sitting their cats. Oh, and I won't be able to post on Friday because I am babysitting a dog and I have to stay at the house. I get to do my laundry over there (no hauling water required) and watch cable TV so there are some perks.
Posted by Daizy at 9:04 PM

Hi there-so pleased you have got to know your neighbours better, does make life easier!

I would leave a comment but I'm going to Google you instead. ;)

What a small world! I have been reading your blog since you posted about it on the VanDwellers list a while back.

Have been reading about the hole in your road, etc., but didn't recognize it from our own trip up/down that road.

Your neighbors are our friends, AND my husband's first boss at NASA in 1973!

Hi Daizy
I googled Daizy in Tucson and got you tending your desert garden. There is no escape, you are famous!! I could come stalk you if it wasn't so far away......

keep it up, and you will be president of the neighborhood association. :)

It is very cool to be able to help out a neighbor and vice versa.

Hi sharon rose, yes it is usually good to meet the neighbors at least once...then I know which ones to avoid ;) When I first moved there I met some that were quite drunk. I didn't visit them again.

big sis, I'm really not that interesting on Google. I've Googled myself already (I don't want my job to be able to link me to my blog!)

judilyn, I've been discovered! Now I am going to have to go underground and change my identity :) You are talking about my neighbors with the cats right? Not the pit bull?

Hi lizzie, yes my garden blog is pretty sad. Everything died or was eaten by critters. I don't post much over there...maybe some day I'll have a success to write about.

over the cubicle wall, it is nice to have some neighbors who will talk to me. Some of the long time residents don't like us new folks.