I know you are all dying to know what happened with the sweet, jumping, biting, hyper neighbor dog. Well...I am pleased to say that there were no incidents of the previously mentioned bad behavior. I didn't see the dog until I went to water my plants late Saturday afternoon. I didn't have my arsenal with me but I decided to try to act calm and dominant and hope for the best. My plants are surrounded by a fence on almost all sides except for a hole in the back where the dog could have come through but instead, he went to the gate and waited for me to open it. I greeted him, with the gate closed and said SIT because that was one of the commands the neighbor said he was working on with the dog. To my surprise, the dog sat. So, I opened the gate and scratched his ears. I tried to stay close to him so that he didn't have room to jump. Then he wandered away to investigate some carrot peels I had discarded earlier. He came back a few minutes later and I made sure that I kept my arms close to me so that he wouldn't get any ideas. I tried the sit command again, which he followed, gave him more praise and then I went inside.

Today I saw him again and I brought him some chicken scraps. Once again I told him to sit before I opened the gate and then gave him his treat. He liked it so much that he carried the plastic container around and by the time I got the container back I didn't want it anymore because of the teeth marks. I don't know if he has forgotten his jumping and biting game or he was tired or by telling him to sit maybe I gave him something else to do. Whatever the reason, I hope he is a reformed dog now.

In other news, why do I get flat tires on Sunday? It looks like this screw has been in my tire for a while but today I finally noticed it because the tire pressure was down to 10 pounds. I filled the tire with my portable tire inflator (a Christmas present from last year) and it looks like it will hold air until I take it to be fixed tomorrow. I had to drive myself to work twice last week and now I have to drive again tomorrow. I'm not saving much money carpooling if I am paying for my carpooler's gas and still driving myself! 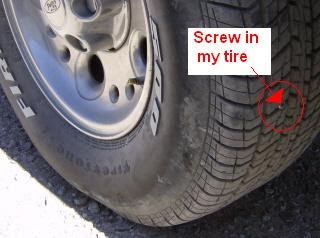 For the rest of the day I tried, again, to paint flames on this gas tank cover for a friend. I am really tired of this project. This is my fifth try. If he still doesn't like it I'm about ready to tell him to take it to a professional. He can have his compressor back. I want this chore to be over! I am much better with making art according to my own standards than making art to someone else's. That's the reason I didn't go in to art as a profession. 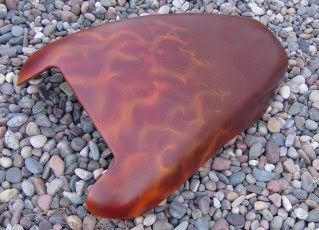 It looks better in real life. The camera shows the flames too bright. If he likes them he will sand the cover once again and have me paint them again because the paint is too thick now. I just want to move on to other projects like maybe...painting flames on my shed? Just kidding.
Posted by Daizy at 7:38 PM

Have you thought about buying another rental house to increase your retirement income?

Hello sharon rose, yes, he likes me. Too much I'm afraid. Too bad he isn't as attached to his owners as he is to me!

Hello ben, I am not comfortable with buying another house and taking on another mortgage but I have considered buying a manufactured home for less than $50k to put on my property and rent out. Right now my plan is to fix up the old mobile home and rent it for $550. That would give me $400 plus the $600 from the house once the mortgage is gone. $1,000 a month would be very comfortable for me. It's just an idea. I'm always looking for new ways to reach my goals faster.

I think I have those same tires - the white lettering is turned to the inside though. Plus, no screws in them (that I know of). Do you think the road grading work got the screw out to where you could run over it?

I think that screw has been in there for a while. I remember looking at that tire and thinking it was low but this time it was really low. I probably got it from the parking lot at work. The other businesses are always opeing crates and boxes of stuff and working on cars. Screws loose all over the place.