I went off to the farmer's market this morning. I had high hopes of buying fresh fruits and vegetables. It opened at 9 and I was there by 9:30. but I left empty handed. The produce section was very small and most of it was sold out already. The rest was arts and crafts. I thought about buying one huge yellow squash and a few spotted apples but the checkout line was really long so I just left. So much for that idea. I guess we really don't have much local produce in southern Arizona.

Since I was already half-way in to town I decided to look at some manufactured home dealerships. I have driven by them many times but never had time to stop. I was looking for a single wide built after 2000 with 3 bedrooms, 2 baths for around $20,000. Turns out they are in short supply. People who have had there houses foreclosed on are buying cheap manufactured homes and moving in to mobile home parks. Space rent at a park is around $200 and payments on a home are $300. Not bad for housing costs.

So this is what I found: 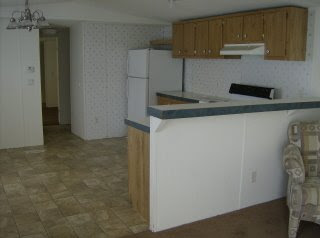 This is a 1997 for $17,000. The bad thing is that it has metal siding and a metal roof. Very hot here in AZ. My old mobile home has it too. Good price though and I like the color outside. Inside is not very well made and it needs some updating. 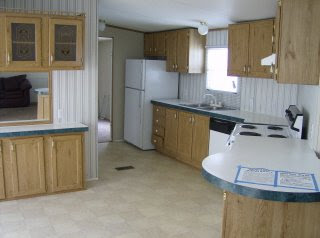 This one is a 1998 for $22,000. Fancier kitchen but wow, it looks like someone sprayed the cabinets with a hose. The fronts are bubbly from water damage. The windows are single pane with screwed in metal trim. Very dated and poor quality through out. 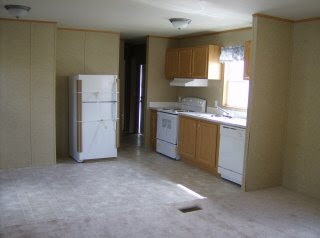 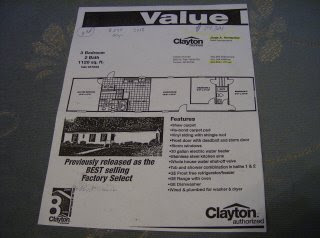 Very basic new 2008 model for $35,000. I didn't like it at first but looking at all of the pictures and floor plans, I think this one is the best deal. It is not too expensive, yet has 2008 construction (like double pane windows) and a peninsula could easily be added in the kitchen to add more cabinet space and a bar. House #4 is not much bigger yet costs $13k more because it has a pretty kitchen. 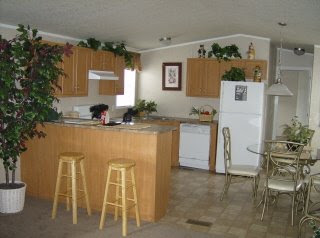 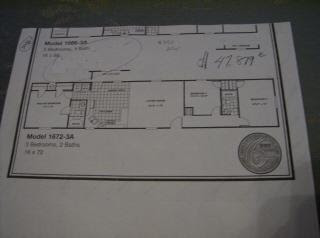 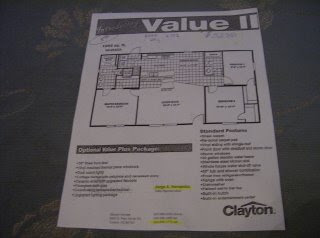 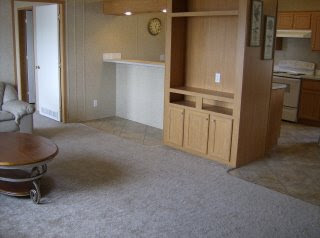 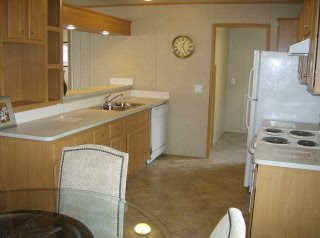 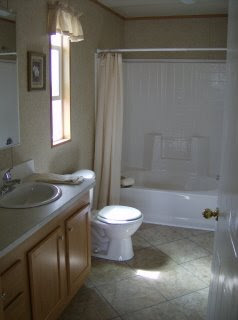 I could potentially make more money this way or, if I lost my job and couldn't find renters for both places, I could lose the manufactured home, my house in town, and ruin my credit. Hmmm. It is a lot to think about.
Posted by Daizy at 6:27 PM

Here is another opinion to consider ... I don't understand the logic of going $20,000 in debt in order to make $3,000 extra in rental income for the month of January. Loyal renters are hard to come by where I live so I am leaning towards suggesting that you just allow them to stay. However the extra money would greatly help your goal. So if you know for sure that the short term renters will not leave you hanging then I suggest this: Go ahead and allow the short term renters to come and pay $4,000 and then you pay your loyal renters $1,000 to find another place to live for 5 weeks. This leaves you with an extra $2,000 over and above the $1,000 you would make if you just allowed the regular renters to stay and you are helping the current renters accommodate your arrangement with the short term renters.

How much room is there on your land for some of these 'houses'?
How about filling the land up with these and living in your actual house, just counting your $$$s!
Okay, perhaps its not that simple but you have to consider all the possiblilites!
Lizzie

Hi there-I like these properties you've shown. Very best of luck with the decisions you take.

Hey, some guy is giving away a refrigerated box car (train) on Craig's List - there you go - that's your new house - a/c and all. All you gotta do is move it there. LOL

Looks like they lose a lot of value over the first ten years or so. If I was seriously considering it, I would make sure to find the best used one I could find, even if I had to wait around for a while for it. Also, maybe do a bit more cost research on their depreciation rates.

Another plan may be just to rent out some of your land for someone to setup their own single or double wide on. This seems like a way to make a little bit of money without taking out a loan, and the associated risk.

I'm not sure how much you could get without a reliable source of water, but you would have to consider that anyway if you bought one to rent out.

Hello Amy, thanks for stopping by. I have thought about tempting my renters back with cash but I'm not sure I like them THAT much. And I am a bit nervous about going in to debt for another home. If I think it will be too stressful, I won't do it.

Lizzie, that is a good idea for the future. I could put 3 homes on the property but I would need 2 more septic systems at $6,000 a piece and run more electrical cable. If I don't end up building something on this land then having 3 rented houses would make my land pay me. Definitely a possibility.

Hi Sharon Rose, it was really tempting to buy one of those houses, especially since the salesmen were so helpful and would take care of all of the details. But I didn't want it for my renters, I wanted it for me! I had to remind myself of my 2 year mortgage plan. Buying a house for myself would make it a 4 or 5 year plan.

Hey anonymous, what state is that box car in?

Yes, over the cubicle wall, depreciation has always been my biggest reason for disliking those homes, the other was the cheap materials and craftsmanship. When set-up on land with a garage, porch, and landscaping, they don't decline as quickly but still, no matter how much you do to it, it still has a year attached. That is why I decided it wouldn't be worth it to refurbish the 1980 mobile that is on my property now. No matter what how much money I put in, it is still a 1980 mobile home. On the other hand, I might revisit the refurbishing option again. After all, the 1980 has done all of it's depreciating.

Renting out the land is another good idea.

As for water, half of the people have wells, half haul water or have it delivered(and then there's me who just collects rainwater). If I provided a tank and pump, the renters could arrange their own water delivery.

New Mexico (Albuquerque). I hear it is really in Rio Rancho. Read about it on a local message board - they were trying to figure out how to get it home and set it up in their front yard. I am pretty sure the City of ABQ would not allow a boxcar in one's front yard, given their stance on water, weeds, bushes, red lights, cell phones, etc, etc Rio Rancho is a different city government. It's just a tad northeast of you.

Search on yahoo for 1940's refrigerated box car and scoll down till you find it. I can't find it on craig's list free stuff, but easier to find that way than going back to 9/16 - I just bet it's still available.

I can't cut and paste on my apple lap tap. I've never learned.

Take a look at The Complete Buyers Guide to Manufactured Homes and Land by John Grissim.


This book is a comprehensive resource guide for MH Shoppers that explains just how the manufactured home industry operates, how to find a dealer worthy of your trust, how to make the right home selection, and, as important, how to be informed so you can make the right decisions. How to determine the fair price of a home. Smart negotiating tactics, (what not to disclose) and even Deal terms—what to insist be in writing


Exhaustively researched, and with extensive input from both industry insiders and consumer advocates, this guide gives you all the information and tools you will need to successfully find and purchase the right home for you.

Hey, I found the boxcar
http://albuquerque.craigslist.org/zip/843375502.html
40x9 that would be cool! Too bad I'm not ready to put that plan in to action yet.

Thanks for the link mfhousing. That must be a popular book. I couldn't find one for less than $29 used on Amazon.