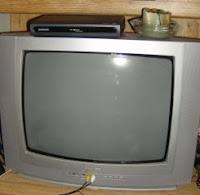 I get my television stations the old fashioned way, thru an antenna. Only 6 stations come through but it's enough for me. This week, the channel I watch most disappeared and another channel has been having sound problems. I thought it might be my antenna so I hauled out the ladder and checked all of the connections. They looked good so I waited a few days. Today the station was still missing. I decided to pull out my digital-analog converter box that I bought last spring with the coupon from this site.

I hooked it up after I bought it but I didn't really like it so I put it back in the box for later. Sure, the reception is better and I get more public broadcasting stations so I can watch educational kids shows all day long but I didn't like that I needed 2 remotes, one for channels and one for volume. I also didn't like the delay when I switched channels. It has to scan for a signal for each channel. I'm a channel surfer so that is very annoying. I know, I don't have many channels to surf but I can still surf them!

After I hooked up the box I got my lost channel back. I was curious so I searched for info on the web and found this from the local news site FOXAZ.com:

A major equipment failure at the KTTU-TV transmitter has knocked out the analog TV signal for KTTU My Tucson-TV 18.

While handling the equipment failure at the transmitter the KTTU My Tucson-TV 18 signal transmission to Cox Cable provider was down for about an hour Tuesday afternoon, but currently any customers who receive their television signal from Cox, Comcast, DirecTV, Dish Network or the off-air digital signal will be unaffected by the analog transmitter outage.

Customers who have not yet made the transition to DTV in time for the February shutdown will experience a KTTU My Tucson-TV 18 outage for an unknown period of time.

Work is currently being done to try and salvage the damaged transmitter, but the extent of the damage and length of time to repair the damage is not yet known.

Customers who rely on the analog signal may be able to make a transition to the digital signal using a converter box. More information on the DTV transition can be found here.

I bet it got hit by lightening. Well, it's good to know I'm not crazy after all. I guess I will just have to start using my converter box a little early. I was going to hold out until the last day in February but since they've started taking my stations away I either have to convert or buy a satellite dish. You all know I'm too cheap to pay!
Posted by Daizy at 7:43 PM

This site has a listing of the best converters as rated by Consumer Reports.
http://www.digitalhdreceiver.com
Anyone know of any other good sites? Thanks in advance.