I Am Not A Social Shopper

I've been frugal too long. Or maybe I've lived alone too long. I have to admit that I have used shopping for entertainment on more than one occasion. But I don't shop well with others.

My carpool buddy wanted to go shopping after work. She mentioned a couple of weeks ago that she had coupons for a certain bath store. I wasn't interested. A few weeks later she mentioned it again and I ignored it. Last week she said, "When are we going shopping?". Ok, she was really serious. I thought it wouldn't kill me to go along so I suggested Thursday (yesterday). 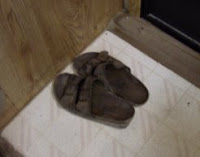 We headed out to run her errands and I brought along my little list of things that I would like to have if the price, size and style was right: hat, shorts, wallet, sandals. We went to 5 stores, well, she went to 7, I wanted to spend more time in Ross. I didn't find anything. When we were in the craft store I kept looking at things that I would like and then thinking that I already have it or I don't have room for it. I found a pair of sunglasses at the last store that I kind of liked and she said I should get them because they were only $5 but I put them back because I didn't need them. I'd rather have $5. I was not a very good shopping buddy at all. I should have been buying lots of stuff I didn't need and encouraging her to buy more stuff that she didn't really need. I think she was rather disappointed. 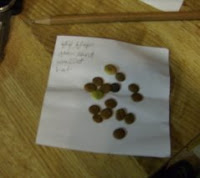 I didn't get home until after 8 and missed having my evening to relax. But then I'm an introvert so social situations drain me. I know I should try to be more social so that I meet more people but when being social involves money I am even more reluctant.

The best part for me was that I saw a tree that I have been trying to get seeds from in front of Ross and it had seed pods. Am I a total nut or what?
Posted by Daizy at 7:06 PM

I have a good friend who used to be a shopaholic. In recent years - she has started to pay down the credit cards - I think I have rubbed off on her to an extent.

Speaking to her on the phone she proudly told me how she was going to be credit card debt free with this next payment. Knowing how high the cards were this is truly an accomplishment for her to be proud of. Then she was telling me how she went to the mall on Sunday and had bought some clothes - but felt the need to explain to me that she thought it was important the presentation she made at work. I am not sure if that was because she knows I dress like a slob, or because she felt guilty just talking to me about shopping.

I think she felt guilty. I often wonder what shopaholics do with all of the stuff they buy. It must pile up fast.

The people at work know I get my clothes from the thrift store and I wonder if they think I dress like a slob. Some of the stuff they wear if pretty awful too and they paid full price so I'd rather be a frugal slob and keep my money.

She generally donates several garbage bags full of slightly used clothing to the Veterans or another thrift organization - about 3 times year. If I donated several bags of clothing, I would be completely cleaned out!

I donate a bag once a year of things that I didn't really like or I'm tired of. I think of it as an exchange program since I'm buying new thrift store clothes to replace them. I have a few favorite items that I wear until they fall apart...and then a little longer (but not in public).