Finally One Bill Slows Down 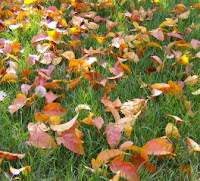 It has been unseasonally warm here this Fall. Last week was the first week that the weather was 85 instead of 90 degrees. It should be around 75 this time of year. I have tried to turn off my air conditioner as much as possible and finally my bill went down. Last month $187. This month $96! Yea! At first I thought, darn, it's still almost $100 but then I looked at my last bill and remembered that I have been paying close to $200 a month in electricity.

I was so happy that my bill was almost half as much as usual, that I went out and spent $100 on sheets. Well, I probably shouldn't have done that. I really only wanted a squared-off bed skirt and a couple of extra sheet to replace the ones that got washed with a stick of cinnimon gum (what a mess). I ended up buying a $60 bed set with comforter, skirt, pillow shams and mini pillows. I was frustrated that I couldn't find an inexpensive squared bed skirt by itself. Buying one seperately can cost around $30! I also bought a white sheet, pillow cases, and a new set of off-white sheets to go with the new bed set.

Ok, so I spent $100 on making the master bedroom pretty, but I did save a little by taping my broken mini blinds together. Now I don't have to replace them, at least not yet.
Posted by Daizy at 6:39 PM