That was an exhausting summer. I know summer isn't officially over but I'm calling it done. The two bedroom rental was trashed, of course. Yes, I know that is my fault for not inspecting it once in a while. I bought it trashed and had 3 tenants who trashed it. Cleaning it out 4 times was my limit.
My realtor saw it at the same time I did and recommended listing it as-is for $125,000. I said no. A little clean up and I want $160,000. She was skeptical. I bought it in 2017 for $65,000. I also said I wanted to make it available for VA and Fannie Mae loans. My intent was to sell it to someone who would make it their home. This area of South Tucson is low-income and investors are buying homes and raising rents.  I could have kept it and waited for gentrification to move in. It is located close to downtown and homes sell for $300K and up in the right area. But I wanted out. Less stress. Time to move on. 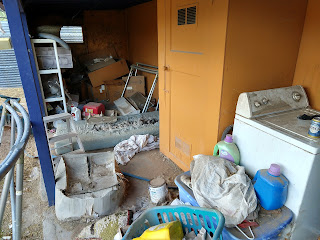 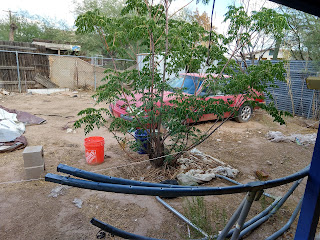 They left me a car and a trampoline. No thanks. The car was towed for free. My realtor gave me the name of an awesome junk hauler and yard guy who took the junk away and trimmed up the shrubs. 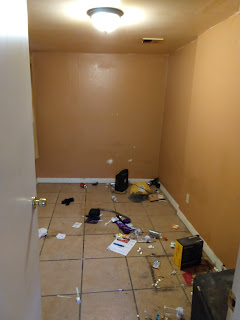 A friend helped me bag up the trash. I helped her clean out her house and she helped me with mine. Win-win. 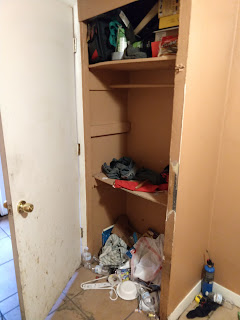 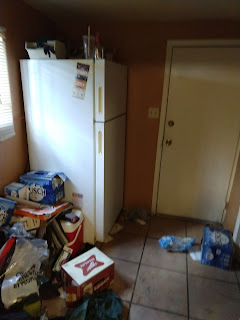 Looks like the tenant enjoyed his beer. His dog enjoyed eating holes in the drywall. The mice were living safely under the refrigerator. 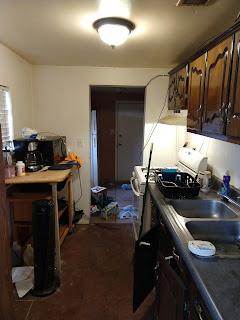 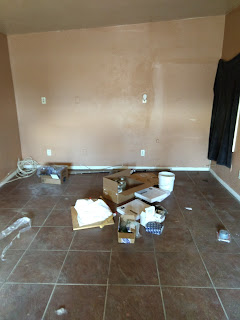 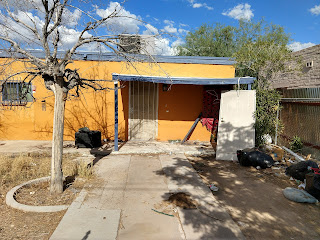 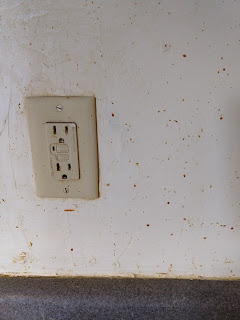 From the oil on the kitchen walls, it appears he only knew how to deep fry. You are lucky this blog doesn't have smell-o-vision. The cigarette smell was very strong. 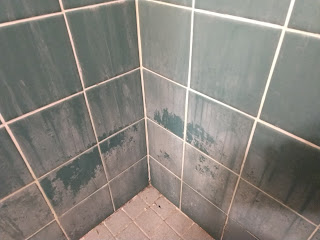 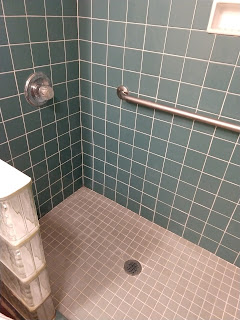 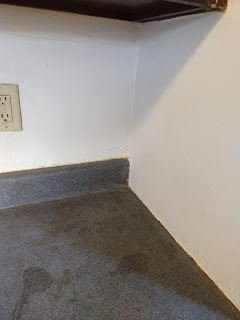 Tried scrubbing the grease off the walls. Finally used oil based stain cover. I wish I had skipped right to the paint. It would have saved a lot of time and frustration. 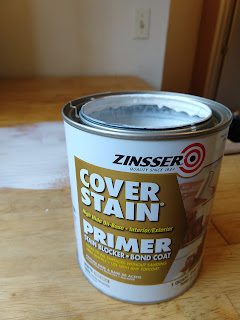 Love this paint. It stank but even that helped improve the over-all smell of the house. 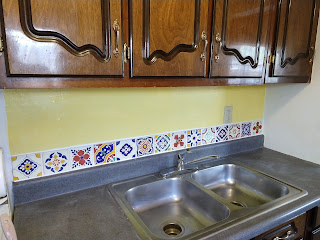 I couldn't pass up the chance to add a little bit of color to the kitchen. I had never tiled anything before. I spaced them so that I didn't have to make any cuts and used grout from a tube. I don't recommend grout from a tube. It was messy and probably too thin. I think it turned out ok though. I did touch up the grout with some white caulk. I bought a fancy kitchen faucet but took one look at the 1950's water lines and gave up on that idea. 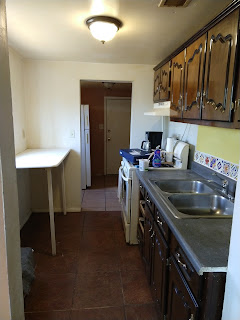 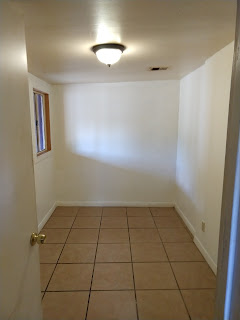 My sister came out from Texas and painted this room for me. I was so happy for the help. It looks (and smells) a lot better. I bought a paint sprayer but she opted to roll it. She probably got less paint in her hair that way. 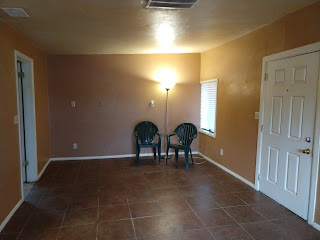 In order to get it on the market as soon as possible, I bought a quart of the adobe color and touched up the living room paint. 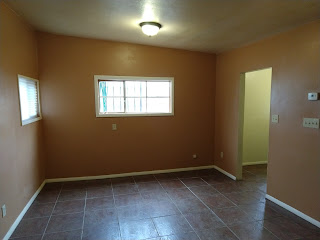 Dining room end of the living room area. The house is 950 sqft. I've never liked the layout but originally it was a 1 bedroom 1 bath and then they made a second bedroom out of the back porch and added another porch. 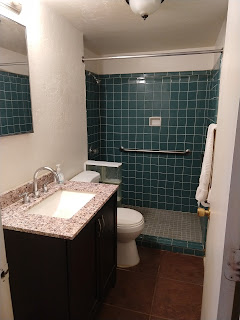 The bathroom didn't need much work except...the tenant had disconnected the drain under the sink because the drain was clogged and had a bucket under there to catch the water. I never did find all of the parts. The plumber charged $800! to unclog the sink, put the drain back together, and replace the shower control. That was the cheaper plumber than the first one I called. I poured drain cleaner down the shower drain and bought a low-flow shower head for $15. I think it worked because the inspector didn't mention the water backing up in the shower. 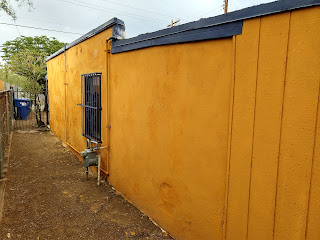 This side of the house has always had a stucco peeling problem. I painted it for the third and last time. It started pouring rain but it didn't seem to bother the wet paint. 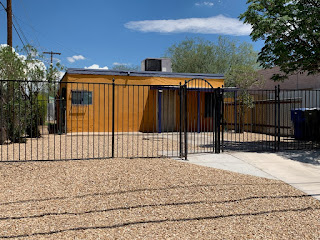 The landscape rock was well worth the $350 for a finished look. A few weeks later the weeds came back with a vengeance.  Paid the yard guy another $100 to weed-whack and spray weed killer.
I got the house on the market at the beginning of August. Google kept suggesting articles about the housing market crashing. Thanks, Google. Inventory in this area was very low with only 2 other houses as my competition. I got 3 offers within 24 hours. 1 from an investor for $130K cash, 1 Fannie Mae for $160K and 1 VA for $165K. I went with the VA loan person and decided see what hoops needed to be jumped. The inspection report took 2 weeks and the appraisal took 3 weeks. It was a nerve-wracking time wondering what they would want and whether I would have to dump them and re-list.
The inspection list was long, as expected, but my realtor said to wait until the bank tells us what has to be done for the VA loan. The buyer wanted a new roof, a home warranty for the appliances, the stove fixed or replaced, a grounding bar added to the electrical panel, water damage fixed on the two porches and a termite warranty.
After the appraisal came in acceptable for the loan (they didn't share what the appraisal said) the bank said that they only needed the clear termite report which included the water damage on the porch. My realtor was able to recommend a guy to replace the wood. I had to convince him to just replace the damaged parts because he wanted to do more. We had to extend the closing for 10 more days because The wood guy wasn't available yet but it finally got done and he did a good job for only $350. 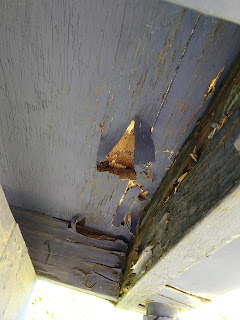 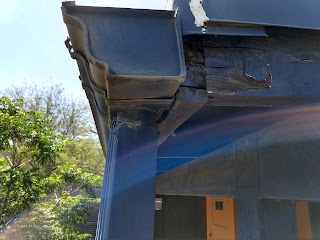 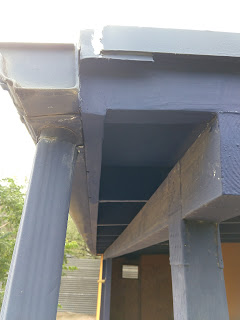 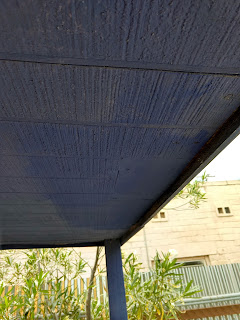 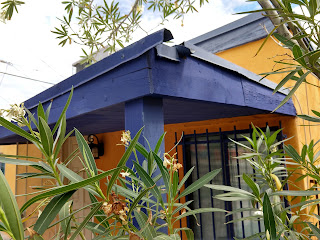 I somehow fixed the stove by wiggling the wires (one burner wasn't igniting) and agreed to buy the home warranty. I had already paid for the termite warranty so that just got transferred to the new buyer. I tried to get an electrician but no one was available for such a small job. I took a gamble and said no to the new roof. The buyer accepted my terms, the house closed and I have a much bigger retirement nest egg. Whew. I am very happy. $3,500 in repairs, 1 month of Saturday cleaning and projects. It was a lot of work but worth it and I'm so glad it is over.
Posted by Daizy at 5:12 PM

Daizy meets This Old House? Wow, quite an adventure getting that house ready to sell again. You made $100k profit, before the $3,500 in repairs and a lot of labor by you and some others. That will surely improve your retirement nest egg, something I have been following for years, and rooting for you to achieve, my dear Daizy!

Thanks, Dave. It did turn out to be a worthwhile investment. It has definitely helped my retirement plan. Too bad my 401k isn't looking great but I do believe it will come back and then I should be ready to make the leap.