Yes, I am still here and doing fine. Things are chaotic with the new house and renovations. We finally got the keys on the 14th and I brought a load of stuff down to put in the closet because I thought it didn't need any work but then Mom suggested that we get the popcorn ceiling texture removed while the house was empty. The living/dining room, master bedroom, and half of the closet had popcorn texture. Almost all of the house needed paint so I couldn't bring any more stuff there. So far, 80% is painted, the popcorn is gone, and there is white dust everywhere. The ceilings have been re-textured and I think they got painted today. Mom didn't like the brown light fixtures so last Friday we went shopping for brushed nickel fixtures with white shades. They got installed today. 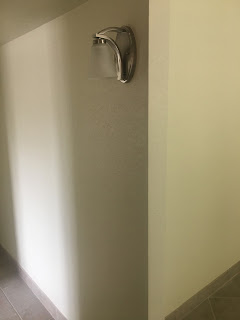 Next on the list is painting the inside of the garage and then most likely covering the countertops with something of a lighter color than black. I submitted the application and project plans for raising the wall in the backyard and adding a sliding door and patio cover. The HOA (homeowner's association) has to approve all outside changes. Hopefully, I will get their approval next week so that the handyman can get started. It will be a lot easier to bring the dogs if the wall is high. I don't want them barking at every person walking by.

Our monsoons are in full swing. It is hot and humid and my evaporative cooler only makes it sweatier inside my house. The rain usually dries up by August so I am hopeful that it won't be so humid when I have to move. 10 minutes of breaking down garden fencing left me a sweaty mess last weekend and the only comfortable spot was sitting in front of the fan. I continued to box up my nephew's stuff and the boxes were soggy. 3 more boxes got mailed to his grandfather's house, 3 more to go, and 3 more to be shipped later to college. I asked him where he wanted his stuffed animals to go and he said to college. Awww. That's cute.

My internet went out for 4 days last weekend. It was strange to be away from it for so long. I still had broadcast TV so I wasn't totally cut-off. I tried to get all of the utilities turned on at the new house last week. I accidentally sent in the request to the wrong water company and the water got turned off on Monday. Mom told the neighbor and they turned it on for her. I think that was illegal but the water company was going to turn it on that morning anyway.

There are 2 internet providers in this neighborhood, CenturyLink and Cox Cable. I wanted to go with CenturyLink since that's who I have now so I have a wifi modem/router but, as the Cox commercial says "We're in a slow zone". They can only offer 5Mbps. Cox can do whatever we are willing to pay for. I signed up for 15Mbps plus TV and phone, took half day off last Friday to wait for the technician and then found out they had rescheduled me for Monday without telling me. I cancelled that bundle and tried CenturyLink. They wanted to give me 5Mbps for $45/month. That's ridiculous. So, I went back to Cox and signed up for internet-only 15Mbps for $35/month. I had to buy a new modem/router but I got a used one off Amazon. I still need to activate it but I haven't had the time to dedicate to that chore. Oh, and I had dismantled my computer and brought it to the new house in anticipation of the technician showing up last week so now it sits in the house alone and I have to rely on my phone and Kindle.

I unplugged the tiny house people's life support today (2 large extension cords). They are headed up to Idaho in search of permanent parking. It's too bad they didn't want to live on my mobile home property. Tiny houses are legal out there. Having to haul water is a turn-off for many people. They were here for 8 months! It was only going to be one month until they found something better but it turned in to much longer. I wish them the best. Maybe they will come back if Idaho doesn't turn out well. 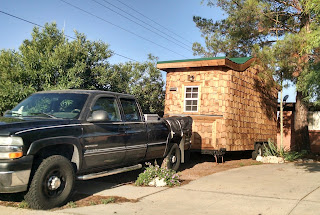 Whew, we are making slow but steady progress on this moving thing. Maybe I'll be living in the new house in two weeks? It could happen.
Posted by Daizy at 6:57 PM

Daizy, it's so hard to keep track of all your houses and properties. We need a scorecard to keep track of them, you real estate tycoon! But each one you live in seems to be a vast improvement to what you were living in before. It wasn't that long ago you were dealing with rainwater in a tank for your everyday water usage, as well as shaky cooling systems. I hope those days are long behind you, forever.

Well, it's my goal to get back to that property with no water but hopefully I will have more money for a rainwater collection system that will be big enough to support me and my hobbies.

It will look better when we move furniture in. It's raining again today and the painter can't get back to working on it until Monday. The move in date keeps moving.

The tiny house is pretty cute, and I like the sconce in your photo! Our bedroom light switch operates an outlet that we don't have anything plugged into: maybe some rewiring and a wall sconce is in our future.

Best of luck with all the moving rigamaroll. I know it's a pain, but hopefully things will settle back into a good routine soon.

I've seen some really ugly and expensive lighting. I guess it's good that I have inexpensive taste. I had hoped to sort through more of my stuff but this heat just kills my motivation. Now I just need to decide if it goes out to my property (non-climate controlled) or to the new house. One of these days I'm really going to have to make the hard decisions and downsize.