Where did I leave off?

Last Thursday, it rained.  I was worried that the rain would affect my car starting, but it didn't, until Friday.  I can't be sure it was the rain but it was the only thing different.  On Friday, I went out to my car and it would not start.  Up went the hood, down went the hammer, then the car started.  After work, I was the last one to leave.  I probably should have tried to start it before that.  It was dead again.  I tried the hammer, and again, and four times later, I was getting worried, but it started.  On Saturday, I ran outside to start it before loading up two dogs for the adoption event.  It hesitated, but started.  No dogs adopted at the event.  Two families were interested in Sassy but her medical costs and interest in cats kept her from getting adopted.  After the event, the car started right up.

On Sunday, no problems.  On Monday, I thought I should probably get a new starter so I called them and they said to bring it in on Tuesday.  I dropped it off and got a ride to work from a co-worker.  That evening, I called to see how things were going.  The mechanic said the car had a new starter but it wouldn't start and they needed to keep it another day.  One of the young mechanics gave me a ride home in his well-worn truck.  I said, "I bet you got a great deal on this truck."  He smiled broadly, "Only $600!"  He just got his first apartment too.  Almost to my house, he realized he had left his wallet at work.  I tipped him $20 for the ride.  He looked like he needed it.  Wednesday, I got a ride from co-workers again.  The car was finally finished at 3pm.  They had to take it to another shop for diagnostics.  One of the circuits had failed.  I don't know if the starter was bad or it was just the circuit but I have a new starter and a new circuit and an oil change for $400.  There goes most of my extra cash for this month and I still have a surgery consult for Jimmy-dog next week. 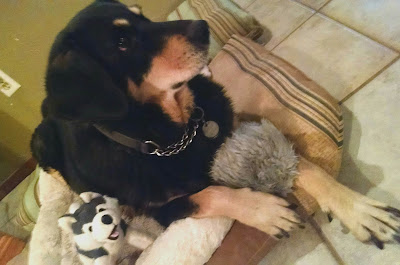 Jimmy-dog has been much improved in the last week.  His back seems to be getting better.  I asked the vet for an alternative to Tramadol since I couldn't tell if it was helping or not.  She gave him Gabapentin for a week and then I used up the rest of the Rimadyl that he had from before.  He actually tried to get on the recliner, although he wasn't able to jump up, and he has been moving faster and terrorizing my chi-weenie again (much to the chi-weenie's dismay).  I don't know how long this will last but it is good to see him with more spunk again.

Oh, and I wanted to show you the pretty Canna plants that my mother gave me a couple of months ago. They flowered! So pretty! 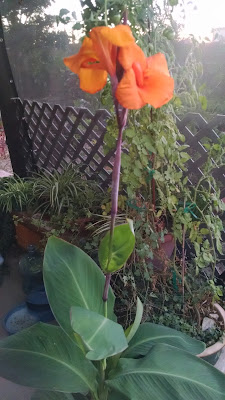 Fahed takes garbapentin for his sciatic. he says its brilliant. Fahed also has a toy Husky like Jimmy-dog. Fahed also likes to lie on the recliner.......definitely seeing a pattern here!

My 13.5 year old lab hurt his back somehow. Couldn't get up, staggered like a drunk when he walked and fell over a lot. The vet gave us garbapentin for 10 days and Rimadyl forever (1 & 1/4 pill a day) and after 10 days he is pretty much back to his stupid, active self. Just have to calm him down every now and then to keep his feet straight under him and not let him jump on the furniture.

The vet wanted to do laser therapy on his joints at $50 a pop, which isn't so bad, but I already pay for Dasaquin ($15 for 16 pills, one pill a day) and Canine Omega3s ($35 a bottle lasts a month) so on top of the therapy it was getting expensive and I'd have bring him to the vet 2-3 times a week for a month. UGH!

So glad to hear Jimmy dog is doing better. Hoping the trend continues (for Jimmy dog, not your automotive issues).

yes, good news on the truck because it is a problem solved, and I hope the same can be said about the doggie.

Lol, it's like a mirrored timeline on the other side of the pond!

I am glad to hear you dog is feeling better. I imagine keeping a lab calm is pretty difficult! I buy Dasaquin too plus blood pressure meds and eye drops and pain meds. It certainly does add up fast.

Well, he has two issues, the tumor and the back problems. Surgery consultation is still on for Tuesday. I am thrilled that his back pain seems to have decreased. It makes me hope that the surgeon is against surgery.

Thanks. I had other plans for that $400 but at least my car is starting when it's supposed to.

Sorry that you had a pretty significant car bill, but here's to hoping that's all in the past. And glad to hear Jimmy's doing well!

Thanks. More Jimmy-dog news to come. He has another appointment tomorrow. I'm hoping for good news and low cost.