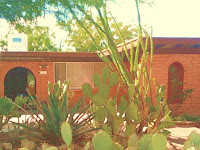 March was a big month for extra bills since my nephew and I took a trip and I had my dog's teeth cleaned (cleaning was the cheapest part.  10 extractions and 2 growths removed were the expensive part).  Yet, I still made an extra $1,200 payment on my mortgage for this month.  I could have skipped a month and paid the bill all at once but I would rather borrow from my emergency fund and pay myself back over 3 month's time.

At the vet's office last week, I asked if I could receive the "dental awareness" discount which is for the month of February but since my vet had the flu and had to reschedule to March, they gave me the discount.  Then, while waiting for them to bring me my dog, I reviewed the itemized bill and saw that they had charged me $14 for a cone collar even though I declined it, and $10 for pill pockets which my dog hates and they didn't give any to me anyway.  They gave me a refund.

On Saturday I stopped by the hardware store and bought paint for my barn-shed.  Usually I go to the store close to my house but they don't carry paint in the 5 gallon buckets.  I checked my credit card statement just for fun today and noticed that I had been charged twice for the paint.  The computers were offline when I made the purchase and it looks like I got charged again when they came back online.  I called the store and was told to call the corporate office.  The corporate office said the store should have handled it so corporate called the store and straightened it out.  I still have to return to the store to get the credit put back on my card.  So many little things that need to be monitored.

And there were two other instances of being over-charged this month.  One was for Tracfone minutes.  I tried to buy minutes for my nephew's phone online and I got a message that said the transaction could not be completed and I needed to call Tracfone.  I called them and the customer service person completed the transaction over the phone.  When I checked my credit card later, I was double billed.  It took an online chat and another phone call to get it straightened out.  Then, my internet provider, CenturyLink, sent me a card that said my credit card was declined.  Called them and got it fixed but I still don't know why it was declined.  The agent told me I could increase my internet speed for only $5 more so I agreed.  Two days later a new router/modem showed up at my door.  Another phone call got me a return number and I sent it back but I still have to call to make sure I am not being charged for a leased router/modem.

Anyway, it was a lovely spring break at the house but now we are back to the school schedule, the mobile home during the week and the house in town on weekends.  9 more weeks until summer break!  I'm looking forward to it, except for the up-coming heat.
Posted by Daizy at 7:57 PM

Looks like everyone is conspiring to rip you off, Daizy. Good for you to thwart their attempts. I hope you caught them all.

That double-billing incident reminded me of a time back in the 1980s when I made a $100 cash deposit at my bank and because that teller had a problem with the printer thingy they run the deposit slip through, they stamped the slip "deposits subject to collection, unless cash". I wasn't worried because I had deposited cash. But I later discovered that somehow the $100 deposit had been credited TWICE. Month after month went by and the bank never changed anything. This was a real-life version of the Community Chest card in Monopoly, "Bank Error in Your Favor, Collect $200." I had little money at the time and was annoyed at my bank for a different reason so I had little incentive to tell them. I figure this put me in the black $100 in the "life's little ripoffs" bucket so any time something happens when it costs me a little money due to a ripoff, I don't get upset.

OMG, that is the type of stuff that drives me bonkers. My last big thing like that was I got a home equity line of credit, just in case, during the financial crisis cause my credit union does it free. I didn't borrow anything and when it was over they reported me that I didn't pay my zero dollars due and TRANS UNION would not fix it - it was reported as a no pay. In the bad section of the report.

You are very patient

Sometimes trying to fix an error just makes a bigger mess. Hopefully your real life monopoly game did t have any go to jail cards too!

Wow, that's awful! Has it been 7 years since it happened? I had an apartment send me to collections once and in reality they owed ME money. I should have been able to send them to collections. They eventually paid me but the ding on my credit report stuck around for 7 years.