Flat Tires Are No Fun

Today was very relaxing, except for my headache.  The weather was beautiful and I spent a little time in the yard trimming the trees, pulling weeds, and detaching the old Queen's Wreath vine from the shed.  The dogs and I took naps and watched new episodes of Hawaii 5-0.

I hope this week goes better than last week.  Last week started out ok but then went downhill.  On Thursday, I dropped my foster dog at the vet to get neutered and then headed to work.  I hit a big pothole very hard and wondered if it bent my rim.  I made it to work in time so I was happy and forgot about my wheel.  At 4pm I jumped in my car to finally meet up with the excavator out at my property and I heard thump, thump, thump, before I got out of the parking lot.  The tire was completely flat so I rolled in to a nearby parking space and called AAA.  They said it would take an hour to send someone.  I looked for the spare tire but didn't see it.  I could have looked in the manual but decided to walk back to work and google it.  Google told me that there is a cover that is removed to reveal a bolt.  The jack has an adapter that fits on it and when turned the spare tire descends in a basket from under the car.  I went back to the car and wondered if it was worth getting dirty so I decided to wait.  The tow truck guy showed up early and he managed to lower the rusty tire in a basket after a couple of tries.  Having the spare on the outside of the car is a horrible design especially when the car lives in snow.  This particular car is from Connecticut.  He jacked up the car with his professional jack and removed the old wheel.  The spare was small and needing air and he had a lot of trouble getting his jack out from under the car.  Then the cap for the air valve was rusted on.  Luckily, I had a leatherman tool that he could use.  I am glad that I waited for him to change the tire.  I learned a lot by watching him and I think I could do it myself next time if I had too although I would have to use the mini-jack that comes with the car. 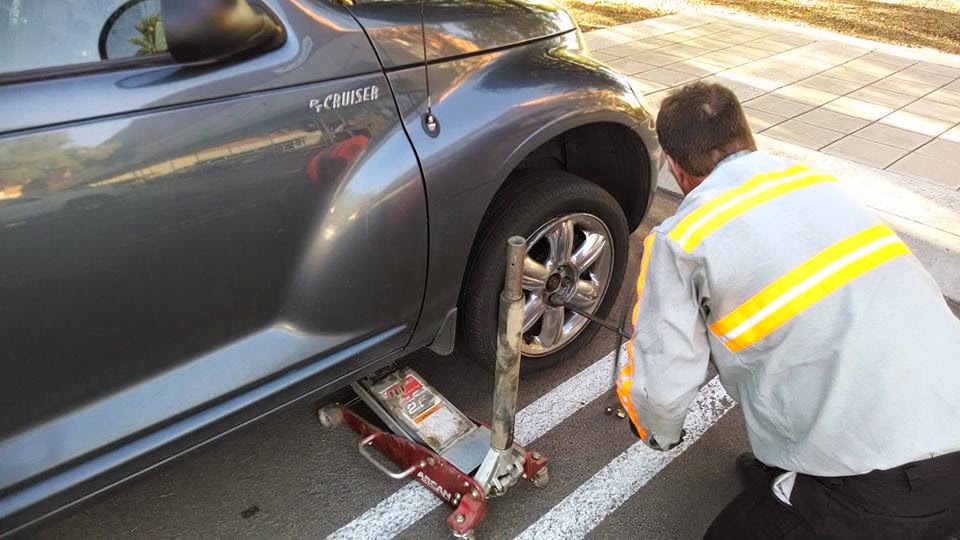 I was sad that I missed my appointment with the excavator.  Maybe he will be available later this week.  I still had to drive to pick up my dog and then go back home.  The car and the spare made it without any problems.  The next day I spent most of the morning at the tire shop.  The tire was cut and unrepairable so I bought 2 tires.  The rim was slightly bent but the tire still held air so I didn't replace it.  The clerk mentioned that people can submit a claim to the city for damages caused by potholes.  I looked it up and the pothole has to have been previously reported.  I drove back to take a photo of the pothole and I noticed that the edges had florescent paint so hopefully it was a previously reported pothole.  The city website said to call for a claim form so I did and they emailed it to me.  I sent off all of the requested information and I hope they will reimburse me for one or both of the tires.

The weekend was finally here and I was pretty tired of new experiences and people but I had signed up for a Co-Op water conservation project in order to earn more points for my own project.  Resisting the urge to go back to bed, I gathered my hat, gloves and water bottle and drove to the rainwater harvesting project.  I picked this project because it was only 5 minutes from my house.  I must admit that I had fun.  We worked from 8am-1pm and installed water collection tanks.  We learned how many people it takes to lift a 1,200 gallon capacity tank over a block wall, how to move a shed by rolling it on PVC pipe, how to install what is called a 'first flush' which sends the first water from the roof in to a separate pipe which can be emptied in order to keep the tank water cleaner.  And we put a leaf screen at the top which is removable for cleaning. 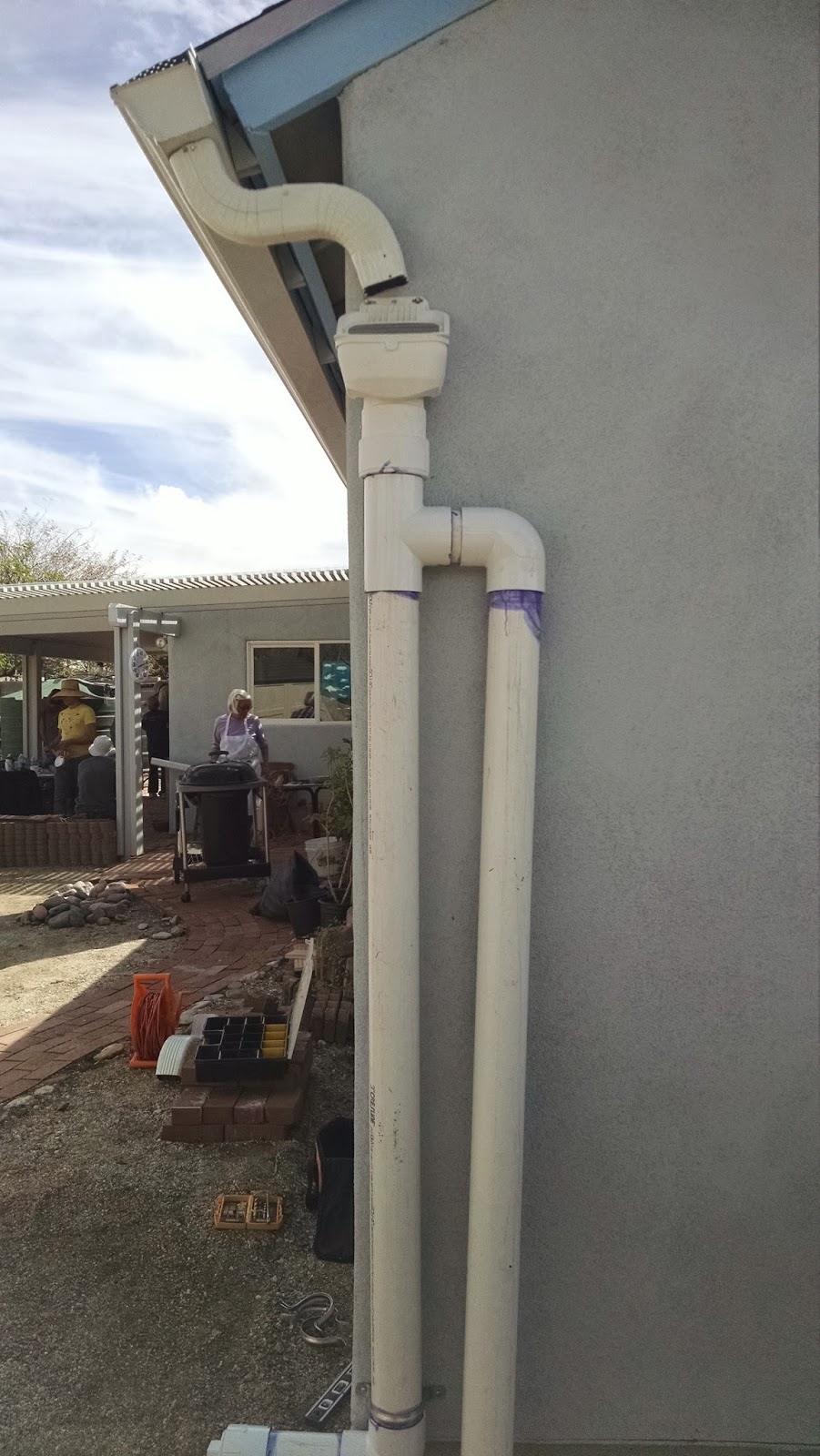 I definitely need this set up on my tanks to keep the lizards and tarantulas out but first I have to figure out how to attach gutters to my mobile home.  I am really glad that I went to work on the project.  So far I have earned 10 out of 16 credits that I need for my own project, whether it is building rock dams or setting up water tanks, I haven't decided.  The best part was how fast all the work got done with a dozen eager and enthusiastic helpers.  And it was fun to be able to talk to people about outdoor showers, composting toilets, etc...without them thinking I was strange.

Tomorrow I am supposed to meet my handyman at Home Depot in order to buy supplies for my mobile home renovation.  I can't wait to see some progress out there.  Photos coming soon, I hope!

Sorry about your car. Hopefully you'll get your money back from the city. That's a good thing that they can reimburse people.

You must learn a lot from the projects you help with. Sounds interesting.

Yes! They will reimburse me! I am very happy about that. The city said they have paid other claims on that particular pot hole too. I think they are delaying fixing it because they plan to repave the whole street soon

You are right, flat tires are no fun. I am glad that you had a couple people who were able to help you. I did not know that you would need a mini jack for some types of cars and a regular jack for others. big rig tires

Flat tires are never fun. I actually have to learn to change mine myself. In the past, I have experienced a flat tire. However, that was when I had a boyfriend. He changed it for me. Now that we broke, I'll have to learn how to do it on my own. http://www.tyrebusters.com.au