I'm female.  I'm single.  I'm in my forties.  I think I have fulfilled the prerequisites for cat collecting.  Last week I decided that it was about time I started making everyone's fear a reality.  I ordered the Crazy Cat Lady 6-pack starter kit. 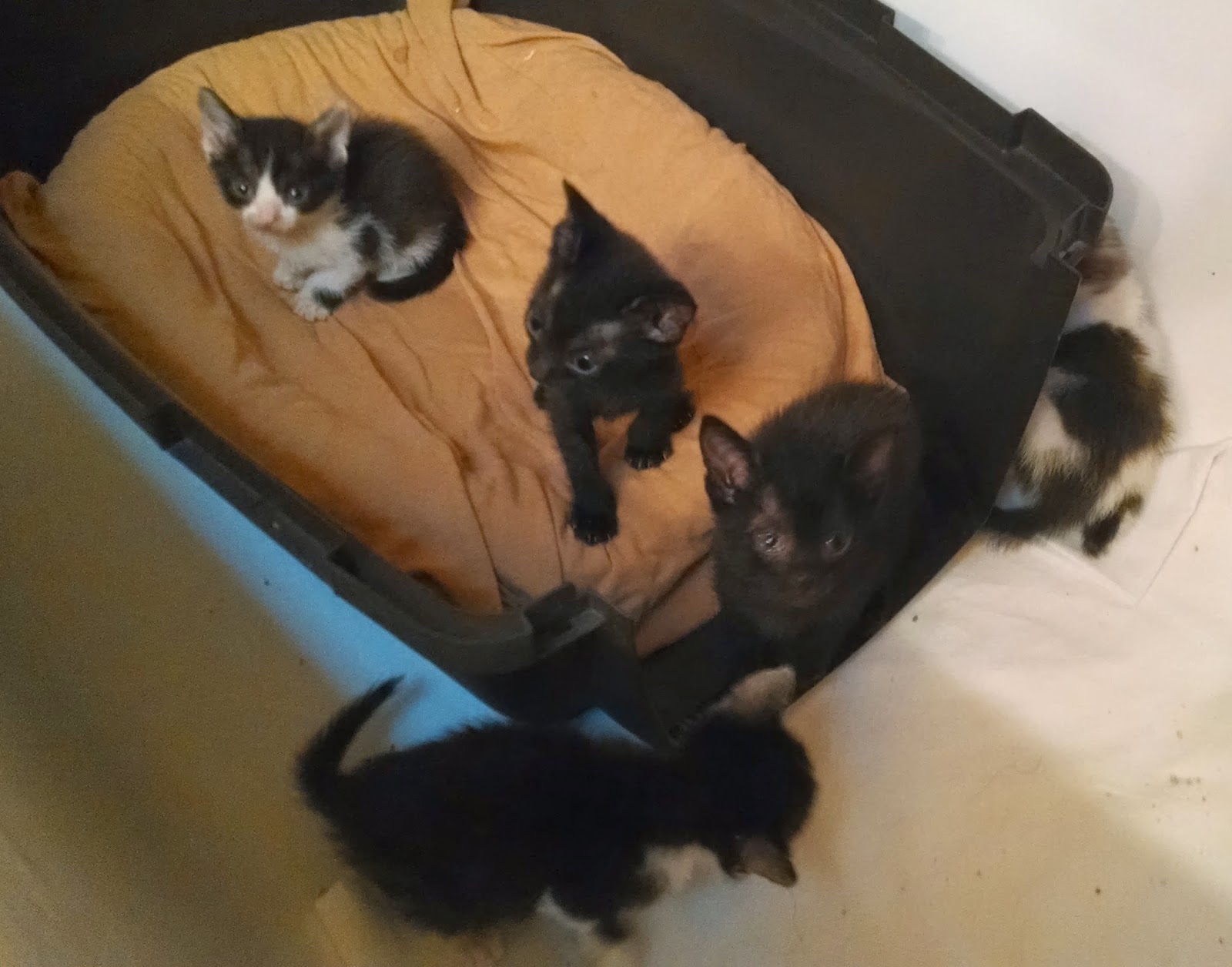 Ok, ok, so they are just foster cats.  The pound put out a plea to cat rescues and cat fosters because they were overloaded.  Actually, they are always overloaded but I have an extra bathroom and I have been curious how my dogs would react to cats in the bathroom so I decided to give it a try.  The pound gave me a bunch of free cat stuff which was awesome because I don't really have much cat stuff left.  I only had to buy a litter pan and litter.  I still need a scooper because I thought I still had one but it disappeared.

The dogs are behaving marvelously.  It is going better than I expected.  The cats are very quiet.  You wouldn't even know they were in there unless you looked.  Maybe they will get louder as they get older.  Twice a day  I change their linens, clean the litter box, feed them, and give medicine.  The kittens HATE the medicine.  The pound cannot afford the special tuna or chicken flavored suspension liquid so I have cherry flavored antibiotics and, I must say, giving cherry liquid to tiny kitten is much harder than giving it to puppies.  Those tiny claws are sharp and those kittens keep their jaws clamped shut.

I will have the cats for approximately 6 weeks when they should be old enough to get fixed and adopted.  Poor momma cat doesn't have much chance to get adopted.  She is not the kind of cat that seeks attention.  Today I saw another plea from the pound for more cat rescues.  Next week there are 40 more cats coming in from a confiscation case.  That is in addition to the normal amount of cats that are dropped off daily.  I don't think the pound will be very excited when I bring my cats back but, for now, I am a temporary cat home only.
Posted by Daizy at 8:21 PM

Haha, it is was a common warning in my 20's and 30's and now I am old enough not to care what other people think. I do hope to keep some cats someday soon. I'd love to have an outdoor cattery where they could strut around and annoy the dogs.

I foster kittens regularly for a local no kill shelter. I love it and my family does too, including the two dogs.

Its very important that you handle those kittens often and it may be hard with mama cat around but you need to socialize them properly with your dogs because kittens that get along with dogs are easily adopted.

Good luck and enjoy the antics. You may want to get a spray bottle to prevent them from scratching your furniture or climbing on things they shouldn't

Hello anonymous, momma cat hides from me which isn't good because she won't get adopted and this isn't a no kill shelter. I don't know what I will do about her, I guess just advertise her as a hide-a-cat and hope someone will take her before I take her back. The kittens are very spunky and personable. Unfortunately, all of my interaction with them so far had been torturing them by giving them medicine. I don't think we are doing much bonding yet. As soon as their goopy eyes clear up they will meet the dogs. I opened the bathroom door yesterday with the puppy gate in between. The kittens just stared at the big dogs and the dogs didn't know what to think, they just stared back. It was pretty funny. I can't wait until they are all better so we can play.

Thanks for the tips!