It was a very busy week at work and I was looking forward to a relaxing weekend.  I worked through most of my lunch hour but decided to go for a walk even though I would be back late.  As I was rounding a curve, I see a small gray dog lying on the sidewalk.  He saw me and trotted away down the road.  I kept walking and didn't see him so I assumed he had gone down another street or in to a parking lot.  Then I saw him, he was drinking out of a sprinkler.  He didn't hear me because a car went past and I sneaked up on him to make him go the other direction away from the busy street.  He was not amused and ran down the middle of the road.  I slowly followed him to see if he would stop and he did, right next to a wash (that's a dry creek bed for all you non-Southwesterners).  I knew that if he ran in to the wash I would never find him so I stopped and waited and inched forward, and waited.  It seemed like forever but I was finally able to touch him and then pick him up.  I triumphantly carried my prize back to the office and showed him to my coworkers. 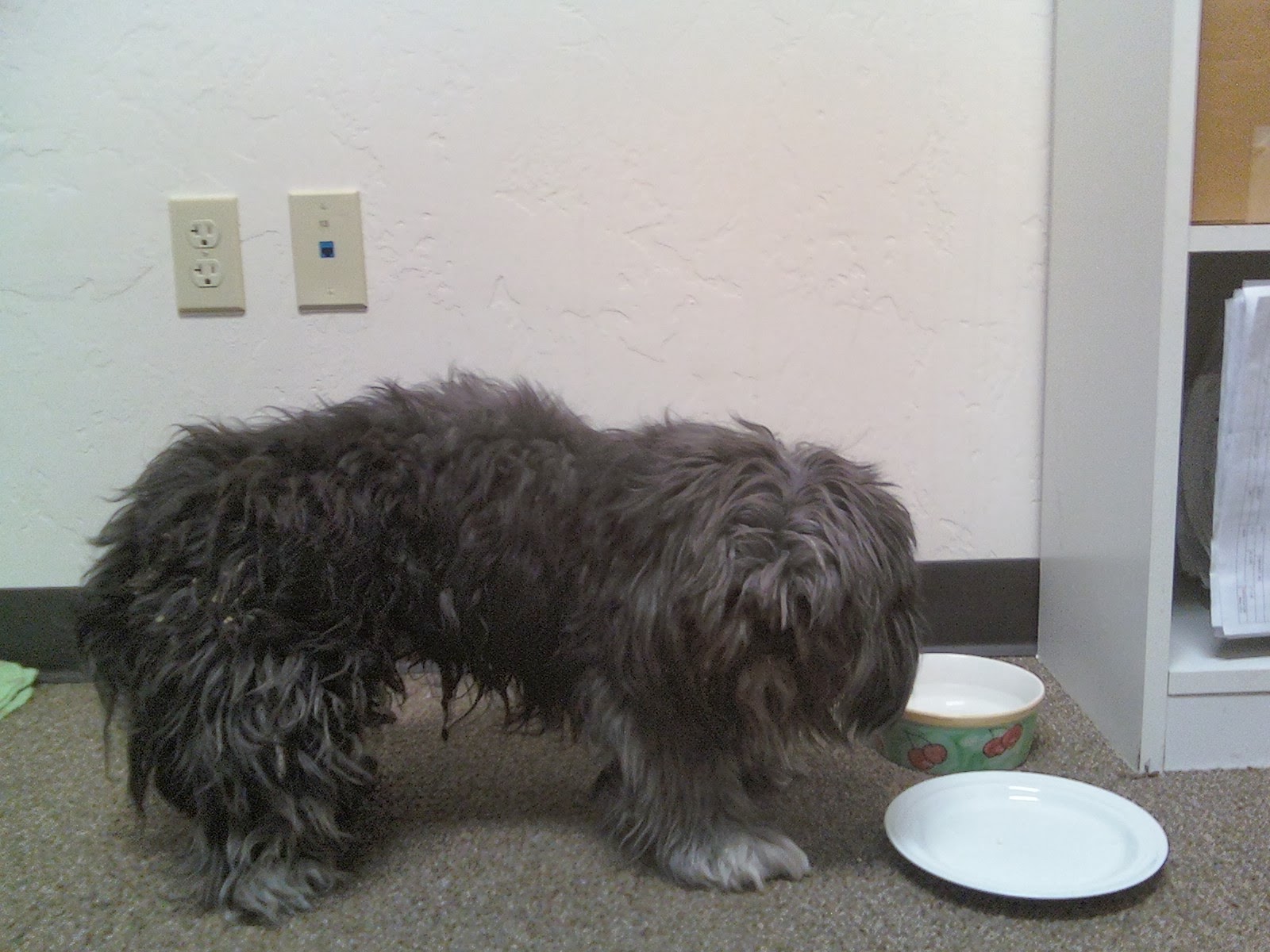 He was a mess.  I sent a text to my friend who is a groomer and she said that she could fit him in on Saturday.  That was good because he smelled and his hair was matted.  So, my Saturday consisted of dropping the lost dog off at the groomers and then going to Home Depot for some supplies for my quail cage.  Friday night had surprised me with rain and my quail cage was only covered with a blanket.  I had moved the cage to the side of the house because my dog won't stop barking at them.  It was my goal to get a roof over their heads in case it rained again.

I spent the rest of the day doing the usual laundry, cooking, watching TV, while I waited for my friend to tell me I could pick up the dog.  It was 6pm before she finally called.  She had a lot of dogs to groom but she got him cleaned up. 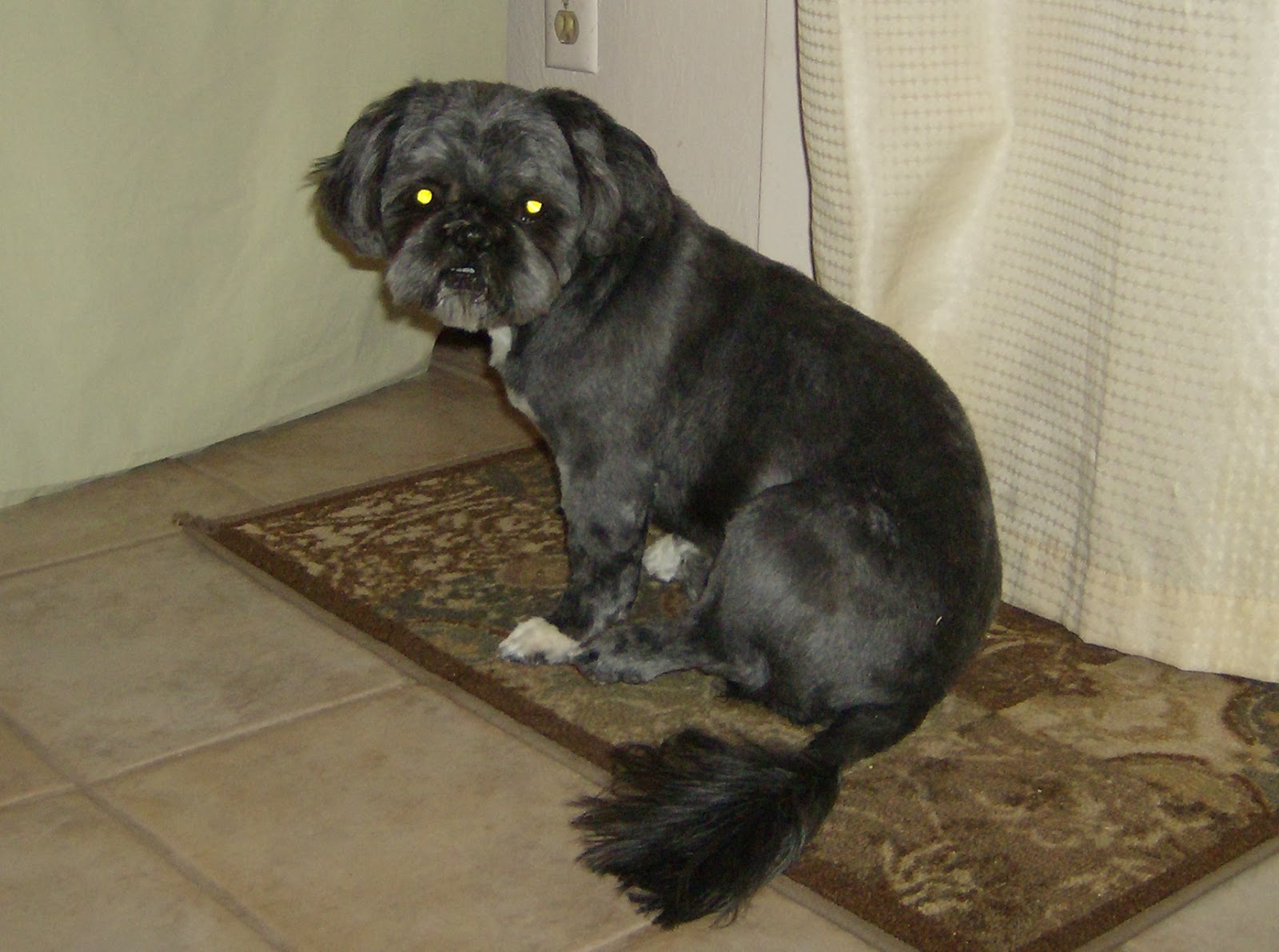 He looks like a different dog, doesn't he?  I had planned to take him to Petsmart to get him scanned for a microchip but it was too late so I took him to the 24 hour vet clinic.  No chip.  Too bad.  I was hoping for one of those news-worthy pet reunions where the dog has traveled 3,000 miles to find their owner.  My guess it that he is from the mobile home park down the street.  I filed a report with the dog pound and the lost dogs on facebook and craigslist, so I will wait a week and see if any owners turn up.
Posted by Daizy at 8:39 PM

What a sweet little face there was hiding under all that hair! You are a doggy guardian angel. :)

Ah bless. Pretty sure he is going to end up being yours. Maybe you can teach him to herd the quail??

Thanks Petunia. I'm glad that I can help him.

Oh no, Lizzie! I only keep the ornery ones that bite and bark! He's too nice to keep.

You're such a great person for helping out this pup, I hope they're able to find the owner. He's a a good looking boy. :)

No one came forward to claim him so he went to a good home.