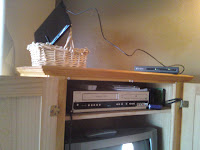 See that black rectangle perched in the basket?  That's my new antenna.  I've been meaning to buy a Mohu Leaf antenna so that I could get local channels but I never got around to it.  It cost $40 and I couldn't see the need to spend the money.  My sister is visiting and she is a big football fan.  She realized on Saturday that I don't have cable or satellite TV and she was going to have to go hang out at a sports bar in order to watch football.  I thought about the problem and remembered that I wanted to try an indoor antenna but it was too late to buy one from Amazon.  I was reading the reviews and one person mentioned that an antenna from Big Lots works just as well as one of the more expensive antennas from Amazon.  It just so happens that I have a Big Lots store right down the street.  I never even thought to look there.  I stopped in and found one.  It was originally $17 but on sale for $15.  I was skeptical but I took it home, plugged it in and my TV found 5 local channels (not counting the non-English channels).  2 of those channels had football so my sister was thrilled.  I think Tucson only has 5 local channels so I don't know what the more expensive antenna would do for me, maybe pull in some channels from Phoenix?

I am happy with my local channels.  When my sister is no longer watching football, I will take my extra TV, converter box, and new antenna to my old mobile home so that I have something to watch while I am cleaning and sorting my stuff out there.  The old mobile home has an exterior antenna but still only got 3 channels.  I'm hoping this new antenna gets 5 channels out there too.  If I had known that I could get local channels with a $15 antenna I would have done it long ago.
Posted by Daizy at 8:21 PM

Do you mean that because you don't have cable or satellite that ou dont watch TV? If so then I am impressed because it always draws me in and stops me doing stuff!!
You cant watch football (British style) on normal TV here, only on satellite because of some multi cazillion £ deal. Which is pretty a dismal indication of how the system works even though we dont watch footie.

This website is a good resource for finding what stations you are likely to pick up on an antenna. You can input GPS coordinates for a very precise view based on hills and other obstructions:

Also, there is technically no such thing as a "digital" antenna. An antenna is an antenna -- it will pick up analog and digital signals alike. There are just different grades of antennas (some better than others based on their design).

One other thing you can try is adding a signal amplifier to your antenna. That makes a big difference at my house.

Lizzie, I'm not that good. I have Netflix streaming so I have plenty to distract me.

Executioner, thanks for catching that. I always get HD and digital mixed up for some reasone. The Mohu was HD, I don't even know if my antenna is or not. I was in a rush. My converter box is what converts the digital signal for my old TV. Obviously, I'm not a techie. Thanks for the link. Just as I thought, I am getting all of the channels available for Tucson. If I get a stronger antenna or booster and a great hill location, I might be able to get a few more from Phoenix but I don't think it would be worth the extra cost.