Little Steps Toward My Goal

Last weekend I met the contractor out at my property who is going to tear down my old termite-ridden garage.  He came out to see the inside just in case it was worth saving.  It was a windy day and he said he was surprised that it is still standing.  Ya, I've often thought that too.  I mentioned that I wanted to sell my two old cars that are in the garage and he said that his son, who is in high school, is in his third year of auto mechanics and is looking for his next project. 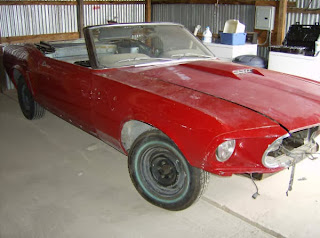 I told him $500 for the Mustang and $400 for the Omega as long as he takes care of transportation.  He called back yesterday and told me that his son is interested and wants to come out and look at them.  I wish I had cleaned up the cars a little bit when I was out there.  They would look so much better with a little effort.  So, I am planning to go back out there on Saturday and wash both cars.  I figure they won't have time to go out there before Saturday since the kid is in school.  It would be wonderful if they wanted both cars.  I really want the cars to go to people who will fix them up.  I know I shouldn't be emotionally attached to old cars and yet I feel guilty for letting the pack rats turn them in to pack rat playgrounds.

I was planning to bring a load of dirt to fill the holes my driveway last weekend but it was too windy so I will try again this Saturday.  I took another load of boxes to my house and I will make a serious effort to empty the RV.  My living room is filling up with boxes but that is ok because I have to look at them which will make me deal with them.  Having them out of sight at my property makes them too easy to ignore.  My tasks for my property are:  fix driveway, sell cars, remove garage, sell RV, fence out snakes.  I hope to get all of those done before next Summer but I would be happy with the first 3.

For my house, I have 3 tasks that I want to get done this weekend but I know that having more than 2 tasks in one weekend is usually unrealistic.  It is only Tuesday so I am still optimistic.  I want to paint my bathroom, fix my shower faucets, and bring another load of gravel for the yard.  I see a flaw in my plan already.  My list involves unloading my truck 3 times in one weekend.  1. dirt 2. boxes 3. gravel.  Maybe it would be more realistic if these were my goals for the whole month of November.  Well, I'm still making progress even if it is not going as fast as I would like.
Posted by Daizy at 8:08 PM

I just have to ask, as I have thought about it before in reading your plans,,,,you are going to fence out snakes? Won't the snakes just crawl up the fence?

Eek. I have read and seen on youtube rat snakes and black snakes climbing brick and stucco houses. The common venomous snake in Arizona is the western diamondback. Luckily, they can't climb like a rat snake although they are capable of climbing trees (I've never seen one in a tree). Typically, they like to explore rat and rabbit holes which mean they go under things like my mobile home skirting. My snake wall is going to be underground at least 12" and above ground 2 feet. I'm hoping that will be enough of a deterrent.

I'm also wondering how you can fence out snakes. You have a lot on your list but will get there.

I found a website that recommended digging 1 foot down and having a smooth fence 3 foot above ground. I wish I could have an army of cats to keep the rats away so there wouldn't be anything to attract the snakes in the first place.