Today was a productive Saturday.  The dogs and I were out of bed at 6:30am.  The weather was cool so I worked in the yard removing my dead sunflowers, taking the wire fences off of my trees (I don't have any tree-chewing dogs at the moment) and pruning.  I suppose I am supposed to wait until my desert willow trees go dormant before pruning them but they were looking like shrubs instead of trees and it is so much easier to envision their ideal shape when they have leaves.  They look so much better now.  I heard a neighbor using a weed-eater.  Too bad I don't have mine.  Maybe I'll go get it next weekend.

I didn't work on fixing my shower because I was still worried about breaking something and being without water for the evaporative cooler.  It is still in the 90's here.  I took a shower in the guest bathroom and I must say, it is a very nice shower.  Maybe I just won't fix my shower and I will use the guest bathroom from now on.  It was like being in a nice hotel.  I love the stone-like tile they used when they renovated it.  I should do that to the master bathroom.  I have been trying to clean the master bathroom and make the shower grout whiter.  I found some tips off the internet.  They said to soak the grout with vinegar on paper towels first to remove the hard water deposits, then scrub with scouring powder and then use straight bleach. 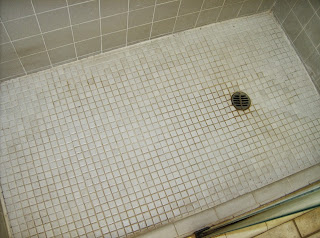 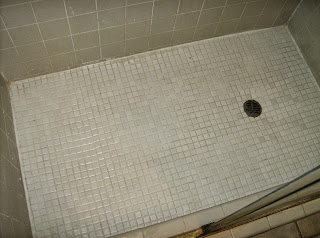 I'd call it an 80% success.  I should just put in new tile but I've never tiled anything in my life and I don't exactly have a lot of free time.  I'll put it on my wish list.

Later on, between loads of laundry and attempting to transplant ivy to my second ceramic pot, I painted a resin fairy and tried to take some more photos for my other blog. 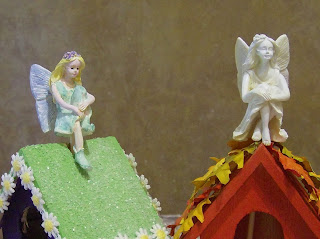 I think the photos turned out ok.  They aren't exactly staged well but I was playing with the light, settings and focus, not the staging.

Another thing that I FINALLY crossed off my list, I sorted a year and a half of mail that I had just stuffed in a drawer.  It was open, well, most of it, but I needed to put the important things in my files and throw out the other stuff.  And, while I was doing all of that, I was cooking up potatoes, rice and chicken for my meals for this week.  Somehow I also managed to watch a couple of episodes of Farscape which I have from Netflix right now.  I think there are around 5 or 6 more movies that I want to see and then I will cancel Netflix by mail.  If I really want to see something I can bet a movie from Redbox once a month.  That would be cheaper.

Oh, and I almost forgot, my new replacement battery arrived today for my netbook.  The poor thing would not hold a charge at all and had to be plugged in at all times and got so hot.  So far this new battery works great.  No more cords!
Posted by Daizy at 9:27 PM

I would block off the plughole/waste and use just a not too diluted bleach on those tiles,they should come back to 100% unless the face of them has worn away.
Nice productive weekend!

I tried that to no avail. I think the previous owners tried to cover the stains with white caulk or something. Perhaps if I scrub them more and try the bleach again I will have better luck.