Finally, my tooth stopped aching.  It still hurts but now it is just sore gums not the pounding nerve pain. I didn't want to go back to the oral surgeon because his fix for my tooth was so painful so I did some research online and learned from everyone else's experience.  The common over-the-counter remedy was the Red Cross Toothache kit.  I looked up the ingredients in the dentist's gauze packing and found that it was eugenol, a mix of oil of cloves, cinnamon, nutmeg and some others.  I found the toothache kit at Walgreens and it contained the same eugenol oil.  I dipped one tiny cotton ball in the oil and stuffed it in the hole where my tooth used to be.  It burned and then it burned my tongue and my throat!  I figured out after that to dip the ball in water first and then roll it in the oil.  Much better.  I was able to bring it to work and change the cotton ball every time I ate.  My office and the bathroom smelled like clove and cinnamon.  It's a good thing I like that taste and smell.

Finally, yesterday, the nerve pain stopped.  Now I can put a little bit of oil on my finger and hold it on my gum and it feels much better.  Hopefully the hole will close up in a few days.  I can't believe the difference between the top tooth and the bottom one.  I didn't have any trouble with the top one.  At least not that I could tell because the pain from the bottom tooth was overshadowing any pain from the top one.

In other news, here is my new foster dog.  He was abandoned at the vet clinic and somehow our rescue's name was on his microchip as the backup person.  We picked him up and then found out that he wasn't one of our rescue dogs.  We called the owner and she said that she has been in and out of the hospital and doesn't have time for him so she told us to find him a new home.  He is very friendly.  Dogs like him get adopted really fast.  Unfortunately, he has started sneezing so I will keep him for a couple weeks to make sure he gets over his cold. 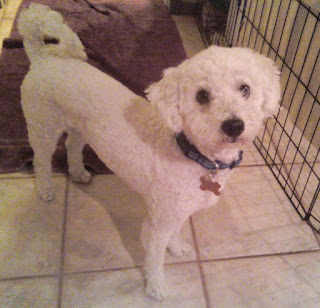 No-one told me the whole top tooth is nicer than bottom tooth things either. Very nasty shock when I had my bottom tooth out. Apparently its about the length of the root. The hole in my jaw felt like a huge hole in the road but of course now its fine and all healed up.
Wont be long, honest

Glad to hear you are healing and your pain is subsiding, Daizy. I am also grateful that I did not go through any of that when I had my two wisdom teeth pulled in 2008. (I had only the two uppers because the lowers never developed, making the uppers useless anyway.)

I guess so, Lizzie. My bottom tooth root looked huge in the xray and grew back at an angle. That's a lot jaw bone to cover. I'm in no hurry to get the other one pulled.

Dave, and I am grateful that my boss didn't tell me that he was hospitalized after he had his pulled plus nerve damage. I definitely would have chickened out!