Where The Wild Things Are

My boss mentioned that he had a tarantula in his house. Now, my boss isn't really sure what a tarantula looks like so I was skeptical. I told him I could come over and identify it for him and he asked if I could remove it. I said sure, so at lunch time we went to his house for a tarantula hunt.

First I looked around the edges of the room. Then we started to move things away from the wall. Lastly, he tilted the couch up and there it was, a BIG tarantula walking his direction. I didn't want to alarm him so I said he could put the couch down. The tarantula scurried to the edge of the room and then I scooped him up with a big cup and a file folder for a lid. 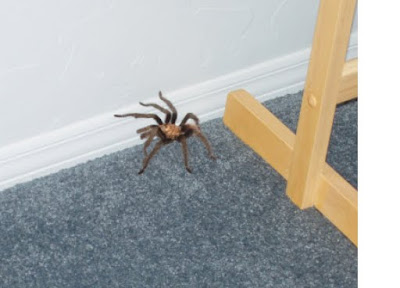 I took him out to the backyard and let him go in the wash. I asked my boss how something so big could get in his house and he said that sometimes when he gets up at 4:30am he likes to open the front door and let the cool air in. Well, that's not the only thing he's letting in. I also found a dead scorpion AND centipede in the same room! That's a little too much nature even for me.
Posted by Daizy at 9:45 PM

Its hot here (for us) so I had my front door open all evening yesterday, maybe six hours. I hat a small cat poke his nose in but i sure hope that was all.
Lizzie

What you boss inadvertently did reminded me of what my dad did once many years ago one summer morning. I was in Florida on vacation so I did was not around to see this firsthand.

He got up to get ready to go to work and heard the familiar sound of one of the cats scratching at the door wanting to be let in. He opened the back door and let one of them in.

Later that morning, my mom sees both cats in the corner of the living room looking at something and playing with it. She goes over there and sees them poking at a small bird moving around but apparently unable to fly. She shoos the cats away and places the bird outside where is somehow uprights itself and is able to become airborne.

What happened, as you may have surmised, is that the cat somehow attacked the bird enough to prevent it from flying and took it into the house in its mouth but my sleepy dad did not notice when he opened the door, leaving mom to deal with the aftermath.

I said to them, "This is what happens when I go to Florida on vacation?"

I would find one of those things in my house and i would emigrate! I can't imagine what I'd do if I saw a snake!

Lizzie, kitties are ok I think. I have a friend who had a cat come in her dog door. Her other kitty did not appreciate the company.

Dave, glad it was only a bird! I can imagine what other creatures a cat can drag in. Lizard, gopher, snake...ew.

Frugal Queen, my boss also said his house sitter saw a snake sleeping along the front door too. I would NEVER leave my door open without a solid fence or stairs! I think his house is a creature magnet!

That is terrifying! Of course, I'm not a fan of bugs in general, but that's a big spider. Yay for you going to help your boss!