Idea Of The Day

I was thinking about the price of a well: $30k, a septic system: $4k, electricity: (I don't even know) and an unfinished1500 sqft. garage/apartment: $30k, and it was adding up fast. It would take a few years to have enough money for that project unless I got a construction loan. Chase isn't offering construction loans right now so I thought I would have a better chance with a credit union. I asked the closest credit union about their loan programs for manufactured homes and construction loans and they didn't know if they offered those any more. The lady sent an email off to somewhere else and said that someone would call me in a day or two. Well, someone called me today and told me that no, they don't offer loans for manufactured homes or for construction anymore. That certainly narrows my choices.
Then I decided to see just how low home prices are in town. I searched for $80k max and got a ton of homes. Then I searched for $60 and under. There were even some fixer uppers in the $30k range. I could buy a house for the same price as a well. I had the idea that I could buy one of these inexpensive homes and live in it for a while, then sell my RV and get rid of the old mobile home so that I could use the existing septic system and electrical box. That would eliminate those two costs. The garage that I want could be built right where the mobile home is now.
Here's an example of a $40k house for sale. It is located near the air force base. 1500 sq.ft. 3 bedroom/2 bath. Built in 1970. 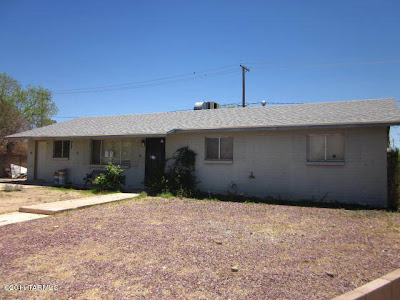 With 20% down, the mortgage with taxes and insurance would be $400 a month. I am sure it would need some fixing up (it certainly needs some curb appeal). In a few years I would have enough money for my garage project and I could move back out to my property (I plan to live in part of the garage like my parent's did when they were building their house). The house in town could be my second rental (because you know I loooove rental houses...haha). I could probably rent it for $700 which would cover the $400 mortgage quite nicely.
Anyway, that's my idea of the day. At least I can amuse myself by going to look at some of these cheap houses in the coming weeks. Seeing them in person will probably make me run away screaming but who knows, maybe I'll find something with potential.
Posted by Daizy at 8:07 PM

I LOVE ugly houses. They scare off most traditional homeowners which leaves me competing with fewer people. I've had a lot of luck buying foreclosures and renting them out. I couldn't imagine spending the same amount of money for a well that I could use to buy an entire house - one that can later generate passive income once you are ready to make your next move.

Best of luck to you.

Since you have been willing to deal with the problems of your RV and mobile home, you should do just fine with an older home needing work. This is certainly the time to get the killer deals on homes, especially in Arizona. (Don't ask me how I know. HINT: I live about halfway between Phoenix and Tucson.) If you decide on something like this, I believe it could work very well for you. Just be sure to get a home inspection first! Good luck on whatever you decide.

Couldn't you also buy a house with acreage in the country that has the well already for a low price? Probably a lot harder to find than distressed houses in town....

Sounds like fun actually. I can see the neighbours so excited to get the (crazy?) lady with the nine dogs moving in. Does the neighbourhood have potential once you have the house fixed up? I wouldn't want crack dealers hanging out in my driveway but a bit of building or decorating sounds like fun.

We had a pack rat in our motorhome and tried everything to get rid of it. After about ten days of frustration, we finally got one of the electronic rat traps that runs on batteries. We were suspicious that it might not work, but it did! And in short order. That was one big rat! It was nearly $50., but it cured the problem, and is reusable many, many times.

We just closed on a foreclosure. My husband looked at a lot of ugly ones - the one we got isn't as "cheap" as the others - but it only needs minor repairs and appliances. Good luck!

Frugal Miser, I am amazed at the buying and selling going on in the low end housing market. Listening to the news made me think that the market was stagnant. It certainly is not. Glad to hear you have had some success.

Laura L., yes, I think I could handle some house issues. I'd rather stay away from electrical issues and cracked foundations. Bad roofs are out of my league too. I've heard there are many good deals up by you too since they were so gung-ho to join Phx and Tucson and then it all just stopped.

Miss France, I did some searching because you asked and did find one property that I will post about today. Still no site built homes on acreage in my price range though.

Miss France, I did some searching because you asked and did find one property that I will post about today. Still no site built homes on acreage in my price range though.

Lizzie, those are my main worries. Annoying my neighbors with barking dogs and living in a crime area. I checked the crime map today and tried to pick an area with less activity yet still affordable. And I tried to pick houses with big yards and block wall fences so that the dogs wouldn't bark all the time. I do want less dogs though. I might have to buy some no-bark collars.

Thanks for the tip Judilyn. I will be rat trap shopping tomorrow.

Frugal Mom, looking at the ones available I can see how paying a little more is better. There are some really scary houses out there.