Now that the mortgage is paid off, I have plenty of ideas for my next project. The only problem is that I don't have any money to do anything yet. A friend of a friend has a double wide mobile home that they lived in while they were building their house. The house will be finished in August and the people are selling their mobile home for only $38,000 which is a fantastic price. It is supposed to be very nice inside but I haven't seen it. If I had the money it would be tempting to buy it. Since I don't have the money and banks don't like to lend for mobile homes, I don't think it is an option for me. For one thing, I would have to get a personal loan with a high interest rate, something I don't want to do especially since I just got rid of my last loan. The other thing is that I really don't want a mobile home. I want a site built home so I shouldn't be buying something that I don't really want. I think I should just fix up my current mobile home a little and save up for a garage and then a house that I can build in stages. I would hate to get a loan and then be tied to my job for another 3 years. I do want to have more free time eventually, not be stuck working to pay off a house that I don't have time to enjoy.
My coworkers think that I should take out a construction loan and build a nice, big house. The thought of that seems like such a waste of time to me. A waste because I don't think I need a nice, big house and because I would be working another 10 or 15 years to pay it off.
Anyway, I am still deciding what my next course of action will be. In the meantime, I got a new dog. 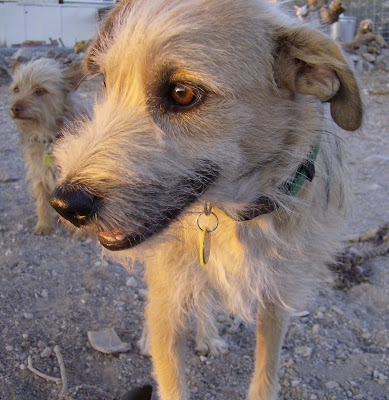 She has an injured leg and can't get up and down my 4 steps in front of the house so I have been brain storming ideas for her. I don't think she could do a ramp because she is not steady enough so I thought of a series of 2'x4' tables with 4" height differences.

When I measured the space tonight I decided that 1 1/2' x 4' would be good enough. She could make it up 4" stairs and she could stop and rest along the way.
Next step, figure out the cost to build it and then figure out when I would possibly have the time.
Posted by Daizy at 8:54 PM

Daizy, you have to update your Mortgage Progress section so it reads ZERO! :o)

I'd suggest at least exploring these kinds of alternatives:

Thanks Dave. I forgot all about it. Wouldn't you know that blogger finally fixed it so I don't have to remove all of the spaces between the lines every time I update it...now that I don't need to update it anymore.

Anonymous, I was really excited about a container home for a while until I called my zoning office and found out they aren't allowed on residential property in my county. That ended that.