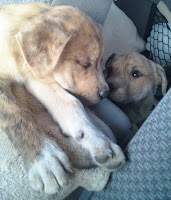 Got up early today because my momma dog and 2 of her puppies had to go to the vet to get spayed/neutered. I was on time and even a little early until it was time to round up the dogs and get them in the crate. Let's just say there was a big mess and I ended up being late but at least I got them there and back and that chore is done. I still have to take 2 more puppies in on Monday.

Work was ok today. The wind and the blooming Palo Verde trees are making my allergies act up. I took a half of an allergy pill and then tried not to fall asleep. After work, on the way to pick up the dogs I was behind an Astro van and was mentally filling it with dogs. Yes, I could get quite a few dogs in it. My only concern is that I don't have any safe place to park it. After what the pack rats did to my truck last year I don't want them eating the van too. I drove past the shed company that builds garages and wondered if I will ever be able to afford a nice secure garage. The sign said "starting at $15 a sq.ft.". That sounds promising. One of these days I should stop there and take a look at some of their work.

Two more days until the weekend. Five more days of work until payday. I think I can make it.
Posted by Daizy at 8:29 PM

beautiful puppies. I want one!

Daizy - I read this on a list today, and immediately thought of you! ;->


Her eyes met mine as she walked down the corridor peering apprehensively
into the kennels.
I felt her need instantly and knew I had to help her.
I wagged my tail, not too exuberantly, so she wouldn't be afraid.

As she read my kennel card I hoped that she wouldn't feel sad about my
past. I only have the future to look forward to and want to make a
difference in someone's life.

She got down on her knees and made little kissy sounds at me. I shoved my
shoulder and side of my head up against the bars to comfort her.

Gentle fingertips caressed my neck; she was desperate for companionship.

A tear fell down her cheek and I raised my paw to assure her that all
would be well.

Soon my kennel door opened and her smile was so bright that I instantly
jumped into her arms.

I would promise to do everything I could to see that radiant smile and
sparkle in her eyes.

I was so fortunate that she came down my corridor.
So many more are out there who haven't walked the corridors.
So many more to be saved. At least I could save one.

I rescued a human today.

What ever happened to the idea of getting a real cat? Ya know, the kind that eats vicious pack-rats?

Judilyn, I've read that a while back. It's pretty much true. I mean before the dogs I really didn't have a purpose. My favorite part is getting one from the pound and making them feel better. It makes me feel better too!

Anonymous, I have some terriers that would LOVE to hunt some mice and rats and squirrels and bunnies. Problem is I haven't fenced the garage in yet. The property had an outside cat when I bought it but it disappeared. I haven't seen an outdoor cat in years. Lot's of coyotes around though!