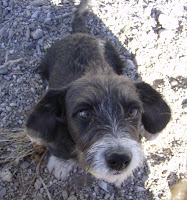 Today was 82 degrees. By Thursday it is supposed to be 62. Maybe this time we will get some rain with the weather change. I heard there is a 30% chance of rain later in the week. I hope I am in that 30%.

Work was ok today. Since the boss is going back East for Christmas, ok, more like for the next 4 weeks, he only talked to me a little bit and decided we should have a meeting about it next year. Oh boy, something to look forward to...haha. He did take us all out to lunch though and that was very nice.

I thought I had built a sturdy enough dog fence to keep the momma dog separate from my other dogs. I guess she doesn't like being alone. She pushed the fence over at the top and jumped over. That means she is away from her puppies all day but we want them to get weaned anyway. At least the momma dog isn't attacking my other dogs. I was worried about having another female here but she doesn't seem to mind. A little over two weeks and she will go to another home anyway.

Four more days to go until the weekend. I don't have anything planned for Saturday yet. Sunday is an adoption event 45 minutes away. Maybe I can get some of these scruffy mutts adopted. I have way too many right now.
Posted by Daizy at 7:45 PM

Oh, that doggy is CUTE.

I wonder how many people in your real life know about your plans? Such as your boss. Does he know how close you are to paying off your mortgage? Does he realize you don't care for your job much and your financial needs are about to decrease dramatically? Just curious.

Petunia, he does know about my mortgage payoff plan but I have only joked about quitting. My other plan is to continue working and save for a house. My boss likes the idea of me building a house so that's what he has decided I am going to do next. We shall see.