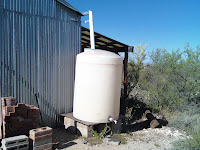 I am so low on water that I actually called a water delivery place that I saw advertising last summer. Unfortunately, the number was disconnected. I had enough water for another 3 loads of laundry and my puppy-nanny is taking home the blankets and towels that the puppies have been sleeping on to wash them. I still have the water in the jacuzzi...I think...I haven't checked lately. Maybe it will rain in the next two weeks. That would be nice.

I added another dog door to my dog run today. The idea is to have two dog doors so that the momma dog and puppies can have their own dog door and space in the dog run. I will only have to shut the hallway door and the mom and pups can stay in the bathroom and then have outdoor access when they are old enough. I still have to figure out how to securely separate the dog run and it needs a cover. I was outside today with my 20 pound terrier and I looked up just as a giant hawk came swooping down. I yelled and it changed course around 15 feet from my dog. That bird must have thought he was going to get the fattest short-eared rabbit he had ever seen.

The new dog door works great so far. In fact, since I don't have an interior door that leads to the dog run, I am thinking about turning this new dog door in to a people door. It will be a very skinny door, only 18" between the studs. I will have to make the door myself somehow. I suppose I could actually cut a stud and make it a normal size door. That sounds like a much bigger project though. Anyway, the next project is to partition the dog run so that is what I should be concentrating on next.
Posted by Daizy at 7:48 PM