Too Much To Do, Not Enough Time 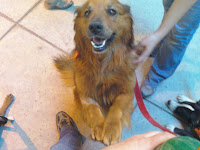 The weekend started yesterday when I took half a day off work and drove across town to pick up a free dog run. It was a simple chore that lasted in to the dark hours of the night and I was so tired when I got home. This morning I was woken up at 6:15 and the dogs wouldn't let me go back to sleep. I gave up and swept the floor, had breakfast and was waiting for my friends to arrive when I remembered that I was dangerously low on propane. No problem. I called the RV place that sells the propane to make sure they were open that early and then got the tank and realized that my truck was full of dog run parts. So then I had to take everything out of my truck bed and then speed off to get propane. Meanwhile, my friends were calling for directions and I wasn't even at home. They did manage to find the place but I was 15 minutes late but at least my ice cream is safe now because my fridge has propane.

We were able to get the dog run supports put together but ran out of time before we could wrap the chainlink around it. That is the hardest part. Then I headed out to another adoption event because someone wanted to meet one of my dogs. It turned out that they have an alpha male and he wouldn't be a good fit for my dog. Too bad. My dog got lots of attention at the event because I had to wheel him in on a cart again because he is afraid of slipping on the tile. We left his crate door open to try to get him to walk a little ways. By the end he was walking 2 feet from his crate but that was it. I had to drag him to the front of the store on a rug to get him home. As I was pulling him to the front of the store I could hear people say "that's the dog who is afraid of tile". It was pretty funny. It is going to make it kind of hard to get him adopted because a lot of people have tile throughout their homes. I'm sure he would get used to it. He just need some patient people.

Tomorrow is another adoption event but this one has carpet so I won't have to drag him anywhere. My other foster dog gets neutered on Tuesday so I will be able to take him to events next weekend. I want him to get adopted fast so I don't have any more tension between him and my other dog. The next dog I get needs to be female and hopefully everyone will get along.
Posted by Daizy at 7:00 PM

I can picture you at petsmart dragging this dog through the store. Too funny. Here only the cats are inside the store. The dogs they do outside.

Oh and thank you for the budget - I am the one who asked about it a few weeks ago. You certainly make it look easy, but I know that I might write a number down on paper and then go off and spend whatever I like. Egads!

At the carpeted adoption event today he refused to go in his crate. At Petsmart he refuses to leave his crate because he has to step on tile. I just can't figure that boy out.

My budget is definitely not one that I would call comfortable. It is only to give me peace of mind that if something happened I could still manage with very little. I hope that I have a fun job to supplement my income. I still haven't figured out what that fun job will be though.