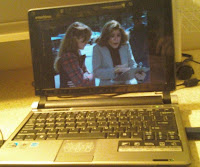 At lunch yesterday my coworkers and I were talking about TV shows that we are watching now. Well, they were talking and I was saying that I had never seen them. One was hooked on a show on Showtime. Another was watching a series on Starz (even the lady with Showtime didn't get the Starz channel). The other was talking about HBO. Then they asked me what I was watching. I said season one of Eight Is Enough online. They all laughed. The guy with Starz didn't even know there were old TV shows online, not that he would watched old shows anyway.

I don't care. I am having fun watching my old shows on my netbook, MacGyver, Simon and Simon, Eight is Enough. I even found the first episode of Misfits of Science (but sadly, only one). And I can watch new shows like Chuck and The Office. There is plenty online to keep me occupied and after that I can get those cable shows on Netfix if I am that interested, but so far not.
Posted by Daizy at 7:03 PM

People look at me like I have leprosy when I tell them I don't have cable. Paying to watch television is about the worst idea I can think of.

I agree. Most of the time I am wasting time when I watch tv. It would be doubley bad to waste time and money. and it's a lot of money!

And before you accuse me of stealing cable service, let me tell you that this was done with the full consent of the cable TV service provider. When they put cable in my apartment 13 years ago, the cable guy did not have any more of the boxes he needed to filter out the channels I was not supposed to get. So I got most of the regular package for the basic price. All I wanted was to add a few channels and improve my lousy reception. I made him write on the service order what he had done so the cable company can't ever accuse me of theft. They can return whenever they want to install the device - it would not be inside my apartment but in the junction box room with all the utility meters.

Over the years, as the local cable systems streamlined their channels, I found myself being given more channels. But in the last few years, they have switched to HDTV for some of them, so I have lost some of those freebie channels (unless I pay for one of those converter boxes). Not that I am in a position to complain about it LOL! I miss some of the lost channels, but I still have the most important freebie ones - for now.

My son is addicted to old Tv on the computer too. Its free so I am good with it.

Talking about pay rises from yesterday, where I work we all get the same rise (%)no matter how many hours you work. I don't see why anyone who isn't a manager should have to work more than their hours. For managers it is different, we are paid more and should have a bit more dedication, I would rather have staff that give me 100% for their 8 hours a day (and then goes home to live their life)than someone that hangs around for 12 hours a day and isn't useful.

Over the Cubicle, I think people pity me for my lack of TV. We are so deprived.

Dave, how lucky for you! No chance of a happy accident for me. They don't even have cable where I live. I'd have to get satalite.

Lizzie, we have a difference between 'salaried' and 'hourly' folks. Salary people, like me and my carpooler, are supposed to put in those extra hours if the job requires it. I just don't think my job requires it. I have a bad attitude. :)