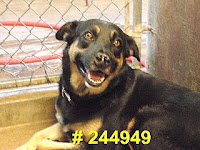 I started my errands at 10:30am and didn't get home until 7pm. I am tired but I want to post this before I go back out to referee my new foster dogs.

My cranky pit mix got adopted! I'm happy yet worried that it won't last long. The fellow who adopted her didn't seem to know much about dog behavior. My foster was clearly acting fearful and timid when she met him with her ears down and her tail between her legs. He took her anyway. I told him that it took a month for her to warm up to me. Later in the day he called me to say that she wouldn't come when he called her and then when she finally came inside she peed on the floor. She did that twice with me when she was feeling scared. And she wouldn't eat the food and biscuits that he bought for her. I just told him that she is scared and to give her time and try hot dogs. I have never met a dog that could resist hot dogs.

Then I went to the pound to go rescue another dog from the kill list. This guy has only half of a nose. Looks like it was bitten off a long time ago. He is a very sweet dog. He isn't really sure about my dog yet. My dog wants to play with him and spins in circles trying to coax him to play. The new dog ignores him or growls.

I also picked up a sweet female dog from another rescue group. She is playful and will play with my dog. I wasn't sure about getting 2 new dogs today but now I am glad I did. My dog thinks she is going to be a great playmate.

And my last errand was to drive all the way to the far side of town to pick up the RV size kitchen sink. It took an hour to get home. I haven't tried it yet to see if it fits in the cabinet that I bought last weekend. I'm too tired to go get it out of the back of my car. Luckily, tomorrow there will plenty of time for plumbing and maybe I can make some progress.
Posted by Daizy at 9:13 PM

You certainly know hoe to fill up your days. Hope the newly adopted fella works out okay.
Lizzie

Dogs take a while to warm up especially rescue dogs who move around a lot. Hope all the new doggy homes work out.

Good luck on the sink too.

I know Lizzie, I need a weekend to relax from my weekend.

Over The Cubicle, The 2 new dogs I got are very warm already. Now I have 3 dogs who just want MY attention and fight over me. I'm not sure that's a good thing but they are all sweet.