Stuff Gone And $72 In My Pocket 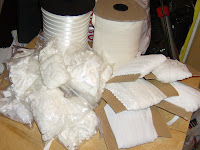 I spent 3 1/2 awkward hours at the sewing club this morning. The ladies wanted me to join the club not just visit and pawn my stuff. Maybe I will get back in to sewing later on after the mortgage is gone. I have learned a lot from that experience, the most important lesson being that I didn't need to spend all of that money on machines and supplies. I buy most of my clothes at the thrift store and it would be nice to learn how to alter them so that they fit better. The ladies in the club make their things from scratch.

Anyway, I sold half of the stuff that I dragged over there. I wish I had sold it all. I am tired of carrying that stuff around. To reach my $500 goal for the year for selling stuff (which is going towards my mortgage), I needed $70 more. I got $72 so anything else that I sell will go towards my own bills. That is good because I totalled up my September budget and with the $82 left from the puppy stuff bill and the $198 for the air conditioner, I am $209 short for the month. There were also 3 birthdays in September and my electric bill was the highest for the year since I was running one AC in the RV and another AC in the mobile home for the animals. Hopefully I will be able to catch up in October.

If anyone is interested in a bunch of elastic you can contact me at tucson daizy girl at g mail dot com. I'll probably end up putting it on ebay, which is where I got it from. I'm trying to think of ways to use it but nothing is coming to mind. Ideas anyone?
Posted by Daizy at 4:31 PM

What about that big elastic hammock/sling shot idea?

Yeah...well, I think we ruled that out because of the cactus danger. Perhaps an indoor hammock once I get rid of all my stuff, I'll have lots of room.

IN my mind I see something like a giant elastic spiders web style puppy enclosure.....but it could be that i need a holday!

Ha lizzie, that would be great. They could wear themselves out jumping and bouncing off it.