Gone To The Dogs

I have a new addition. It could have been worse. I almost had 9 new additions. I was weak and kept checking on the mom and 8 pups. They kept begging for a foster home before 5pm or they would be put to sleep. So after lunch I called. I had to call 5 different rescues before I actually found someone who rescues babies and who would answer the phone. I expected them to say that I didn't have adequate experience or facilities for momma and pups but the lady was very enthusiastic. She said it was great and arranged to meet me at the dog pound at 6pm. I left work a little early and called her when I was on my way. "Oh, she said, I was just going to call you. Another rescue got them out this afternoon, but I have lots of other puppies that you can foster and if you take one of these then I can rescue another dog from the pound!" Well, I couldn't say no. I already had made so many doggy arrangement in my head that I said, what the heck, I'll take one. I met her at the pound and she brought this little girl. 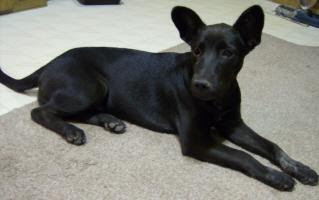 Her name is Jojo and she is a Labrador mix. I think half black lab and half cattle dog. At first I thought Shepherd but the coloring on her front paws makes me think cattle dog. Anyway, she is on medication for an infection so I am her doggy mommy and nurse. I had no problem giving her a pill in a spoonful of ice cream.

The cat is still not sure about her but surprisingly not as freaked out as I though she would be. Big dogs make her hide under the covers but she is hanging out in the open in the other half of the RV. I did shut the door between the bedroom and living room. The cat can get through the hole under the door (for the steps) but the dog can't. Tomorrow I will look for a big crate and hope that the puppy doesn't mind hanging out in it while I'm at work. If she does mind, I'll have to make other arrangements in the mobile home next door, like a puppy play area.

So far I have spent $5 on puppy chow, besides the gas to pick her up. The food was on sale. Tomorrow I will go to Big Lots and see if I can find some deals. I really only need food, a collar, and a better leash than the one she came with. I can find a big crate on craig's list for $50 (hey, that's what I can spend my extra $50 on. I knew I'd find something!)

The rescue lady says that she usually has foster puppies for an average of 4 weeks before they are adopted. Jojo is 4 months old and she will be spayed in 2 weeks. After that she can go to the pet store adoption events. I will work with her and try to train her as much as I can. I've never had a dog so she will probably train me more than I will train her.
Posted by Daizy at 8:11 PM

She is beautiful. I suspect I wouldnt be able to hand her over to her new mum once I had her, especially if the cat was happy with her. Well done you!

Good news on the momma and her pups too. Glad they got out.

She is so cute. That is a really nice thing to do!

Tessie, it seemed like a fun way to volunteer without leaving home. Well, except for all the trips to the store for dog supplies.

Lizzie, well, I don't think I can call the cat "happy". I would call her annoyed and patiently waiting for the intruder to leave.

Over the Cubicle, the mom and pup plea was up on craig's list this morning again. I wrote to another rescue and asked what was going on. She promised that another rescue would have them out my noon Sat. They had better have gotten out!

Awww, what a beautiful puppy! I predict you will get attached and keep her (because that is exactly what I would do).

Oh no Petunia! Doggie must be adopted. Kitty says so. :)

She is beautiful! How wonderful of you to take her into your home.