Time For The Kayak To Go

I love my kayak, or maybe I just love the thought of kayaking. I bought it in San Diego when I was visiting one weekend. This was back when I had a better paying job in Yuma, AZ and no lofty retirement goals, just lots of extra cash. I really wanted a small sail boat but I didn't know where I could store a sail boat and trailer. The kayak fit nicely in my RV storage compartment. I used the kayak once when I bought it and then once when I was in Yuma. The Colorado river goes through Yuma so there are a lot of dams and lakes. I didn't have any friends with kayaks so I didn't have anyone to go with. The guys that I worked with were in to fishing in these float tube things. They just floated and fished, not really compatible with a kayak. They said I could go out with them and tow them around but I never did.

There are a few lakes within an hour and a half drive of Tucson but I wouldn't want to go there. Too much drug activity and who knows what else. The lakes in Phoenix are a few hours away. Too far to be practical. 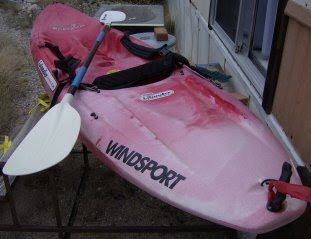 A friend of mine inquired if I still had my kayak and if I was willing to sell it. I have thought about selling it but I haven't because someday I would like to use it. But since he is a friend I decided this was a good time to say good bye. I looked on craig's list to see what a fair price would be and decided it was worth $250. He said that was an acceptable price and now he wants a picture. He lives in a different town and he won't be able to pick it up for 2 weeks. I dragged the kayak out of my back room in the mobile home and took a picture for him. Deciding to sell it and getting it out with all of it's accessories was most of the battle. If he decides that he doesn't want it after all I will still go ahead and sell it. I have already sold it in my mind and I really like the extra space in that back room.
Posted by Daizy at 3:05 PM

That is a nice kayak. Not sure about the color though. The lakes around here are overrun by ski boats, so kayaking is a bit dangerous. I know a few people who do it though.

I think that color would be cherry-vanilla swirl. Very hip in San Diego. Kayaking is better in the no-wake zone of the back bay. Too far to drive for me.

The color is good for visibility. That and bright yellow ;)

I sold my surfski last year. I miss the idea of it but I rarely took it out anymore.

When you come to visit we will go take out kayaks for fun :)

Daizy, do you still have the Kayak?
Let me know.
Thanks.
Chuck at dumpman9-kayak@yahoo.com