A Free Pet Is Never Free

Today was an interesting day. First, my 20 shares of GM became practically worthless. I am not totally sure if they are worthless yet but every one seems to think that they will be when GM finishes it's meltdown. This is another reason why putting my mortgage money in to the stock market would be a very bad idea. I mean, I wouldn’t put all of the money in one company but I would have to choose mutual funds to invest in and even when I try to pick ones which have done well long term I still manage to lose money. Believe me, I've tried it. 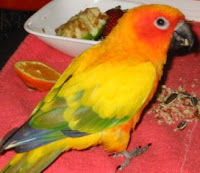 Then one of my co-workers told me that an exotic bird landed in her yard yesterday and it let her take it in to the house. It turned out to be a Conure which I had never heard of before so I learned something new today. She went door to door in her neighborhood looking for the owner and listed the found bird on many websites. Now she has fallen in love with the bird. Today at lunch we went to the pet store to buy some things for the bird. 109 dollars later she had purchase bird toys, many kinds of bird food, and a bird book. She is hoping to buy a large cage fore $150 on craig’s list but hasn’t heard back from the seller yet.

In the mean time, her husband, who works nights and is home during the day, let the bird out of the tiny parakeet cage that they bought at Walmart as a temporary solution, because it seemed unhappy. When he wanted to get the bird back in the cage he had a fight on his hands. He won out but after a nap the bird was ready to get out of the cage and started squawking loudly. Not a good pet when one spouse sleeps during the day. He called his wife at work and told her that she needed to buy a big cage to make the bird happy. It didn’t matter how much it cost. So tomorrow she and I will be taking my truck and going to either purchase a large cage for $300 from the pet store or $150 from the person on craig’s list if they contact her in time.

Wow. That’s a lot of money for a free bird. I think I might know why it “escaped” from it’s original home. From Wikipedia: It is widely speculated that the reason there are so many feral conures is that they make too much noise for many pet owners, who "accidentally" leave their flight feathers untrimmed. Ha! I believe it.

What will they do if they pay $300 for a big cage and the birdie still doesn’t like it? I guess we will find out the expensive way.
Posted by Daizy at 6:50 PM

It is a pretty bird for sure. Maybe covering the cage with a towel will get it to stay shut.

When I was a little kid, we had two finches that the neighbors gave us because they didn't really want them. After about a week, the thrill was gone for us too. We ended up giving them to some Jehova's Witnesses who knocked on the door and said they really liked them.

Covering the cage works for a while but not long enough to let her sleep through the night and then him to sleep during the day. It lives 15-45 years!

I had a parakeet, it bit me and then died. Not right away. :P

45 years! Maybe they will let it bite you if they get tired of it in twenty years or so :p

Haha. Come to think of it, I don't have a good history with birds. I accidentally killed my pet quail and the racoons got the chickens when I forgot to close the pen. Good thing cats are more hardy animals.

My bird (cockatiel) makes a ton of noise too but we have got used to it. If you cover him at night he shuts up but the rest of the day he needs to join in with every conversation & alert us to any action (anywhere in the neighbourhood) that we might have missed! I miss my lovely quiet cats sometimes.

What if there is a conspiration of pet shops, letting pet birds loose in the hope of a later capture by benevolent people and resulting in big sales in bird pet miscellanea?

Hi Lizzie, I went to see the birdie today and I am very happy that I have a quiet cat! That thing is LOUD!

Boldi, you know, that thought crossed my mind because all of the big bird cages were empty at the pet store. The signe said they were 're-stocking' but we know the truth!