A Present For Me

I have been talking about buying a flat screen monitor for a while now. I don't have a lot of room in my RV and my computer takes up the entire dining table. I thought of getting rid of the desktop entirely and buying a laptop but I don't have the money for that right now. Buying a flat screen monitor would give me a little more space but they are expensive when bought separately.

Well, yesterday a friend called and asked if I was still looking for one. He bought a new computer and had an extra monitor. He said I could have it for $20. Yea! It looks great, the screen is bigger than my old one, I have more space for my keyboard, and I can push the monitor farther back on the table so it isn't so close to me. A nice buy for $20. 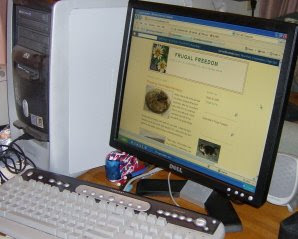 I was going to put my old monitor in to the mobile home with all of my other junk to save it as back up just in case something happened to my new monitor but I decided to just go ahead and get rid of it. I have been wanting to try out freecycle for a while now so I signed up and posted my monitor. I could have posted it on craig's list for $15 but I always seem to get responses from people on the other side of town who want me to meet them half way. No thanks. So, I listed it on freecycle for my area of town only. It took a day for the post to show up but once it did I got an email from someone who lived a few streets down. She said she could pick it up whenever I was available. I gave her a call and met her at the end of my road. She was thrilled to have it because she said her monitor was dying. I assume she was telling the truth. I really have no way of knowing whether she needed it herself or whether she was going to sell it to someone else. Either way, it is no longer taking up space in my RV! I'm trying to get over my pack rat tendencies. I think it was a nice exchange all around.
Posted by Daizy at 4:32 PM

Very nice! Very nice of you to give the old one away too.

At work they replace ours when they break. My old one is about the only non flat panel still working. It is massive. Looks like I have a refrigerator on top of my desk. That is okay though - easier to hide behind :P

Ooo! I think you just invented the monitor-fridge! For cold drinks while you work.