This isn't a very clear picture because I took it through my window. I was looking outside and I saw the little lizard climb up the brick. Then the big lizard crawled up next to him. Yikes! These lizards are getting bigger and bigger. 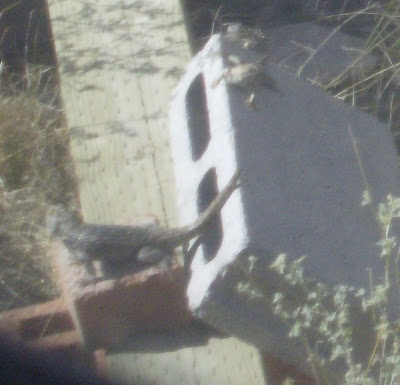 It's late May and that means the Cicadas are out. I tried to find one so that I could take a picture but the only one I saw was flying from tree to tree singing it's very loud song in search of a mate. He didn't want to pose for my picture. I found a picture on this site:
Tucson Cicada . Cicadas aren't a big deal here because only a few come out every year for a month or so. In some eastern states they hatch every 13-17 years en masse and take over towns. It always makes the news when that happens and inevitably someone makes it on TV with their Cicada stir fry or whatever creative dish they can think up. I don't have enough Cicadas for a meal and even if I did I wouldn't want to. Beans and rice are cheap and they don't look at me when I eat them. But...those lizards might be tasty. :)
Posted by Daizy at 2:55 PM

Apparently the 17-year cicadas from the north and east are a different species from the ones you have in Tucson. I remember cicadas every year growing up in Texas as a kid. I would always find their discarded outer skins attached to trees that I'd climb. The sound of their calls in late summer is a strong memory from childhood. I haven't heard it anywhere else like it sounds in Texas.

You should let the lizards be. It's hard enough living in the desert without one more predator on their trail.

Hello Executioner! We have Apache Cicadas, the only cicadas that sweat. 3-5 year over-lapping life cycles so we see them every year. I heard the cicadas in Louisiana one summer. So loud! Luckily I only get a few.

Don't worry, the chunky little snack-sized lizards have nothing to fear from me...even if they taste like chicken. :P

Years ago when we lived in Greece we used to get circadas. They used to sit on my washing line. I think they thought my wooden pegs were potetial mates. A bit too noisy for pets though and not so intersting as the lizards!

Neat little lizards in their lizardskin...um...skins.
:-)