For a few weeks now I have noticed little mouse or rat "evidence" inside my RV. At first I thought it was something else, maybe a dead bug or two? Every few days I noticed a few more in different places. I thought about where to put the rat poison. I didn't want it inside and I didn't want other animals to get at it outside. One day I reached for a Q-tip and saw that they were all frizzy. 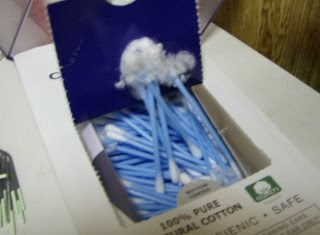 Hmmm. then I looked in the rest of the drawers and saw that the rat had been testing other items as nesting material. He chewed an ace bandage and an old leather bag. 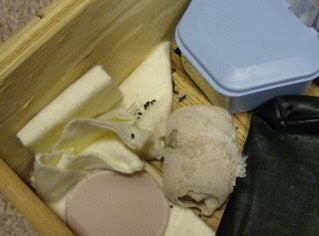 I could tell that the rats where coming in through the hole where the pipes come up from the bottom storage compartment also known as the basement. I stuffed aluminum foil in the hole as a temporary fix. 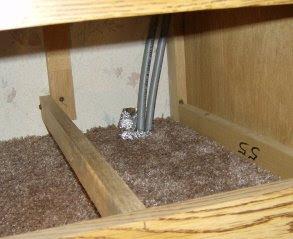 This was a perfect place to put my poison. After the first day I could tell that they really enjoyed the rat bait and had been picking at the foil trying to get back through the hole. Poor little guys. I hope they enjoyed their final party. 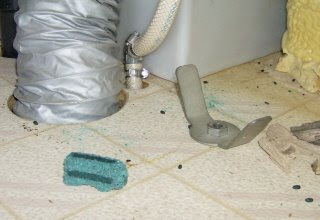 I thought they were going to get back at me by dying in some out of the way crevice of the RV and stinking up the place but so far they haven't. I saw a 3 inch long dead mouse/rat outside today so maybe that was one of the culprits. I didn't take a picture (but the thought did cross my mind).

And now for a less bothersome creature, I was going to transfer some water out of my jacuzzi which I only use as a holding tank, and I saw this little guy: 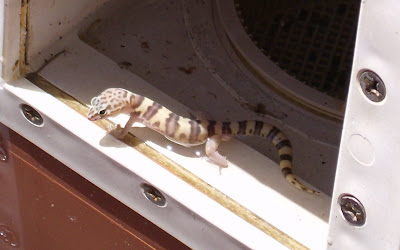 Western Banded Gecko
He looked very content sitting in the jacuzzi filter (good thing I didn't turn the filter on!)so I covered it back up and got my water from a different tank. I hope he's ok there. I am sure he has plenty of bugs to eat. Last year there was a black widow spider living under the cover. I would much rather have a gecko.
Posted by Daizy at 6:07 PM

That's a cool looking Gecko. And thanks for not showing us a picture of the dead rat! Did your cat notice anything while the rat was around?

Over the Cubicle Wall, everybody asks me why my useless cat didn't eat it. She doesn't know what to do with those sort of creatures. She only eats dry food. I blame myself. I got her before her eyes were open and I was a very poor cat teacher. She did seem more content over the last few weeks. Like she had a new toy or something :)

I've never met a pacifist cat. I did see a dog on a leash with a cat on it's back and a mouse on the cat's back on the street one day here. I googled mouse cat dog, and it turns out the guy that owns them travels around with them.

I couldn't get your pic to show up. Was it this guy? He lives a few towns over from me!
http://www.azstarnet.com/allheadlines/136878.php

If you leave the poisoned rats around, other animals will eat them, - along with the poison inside - probably killing* more animals. Bury them.

*or damaging, if it is the haemophilia-causing kind of poison.

What a little cutey. The gecko I mean not the damage & destruction caused by the mouse. There was a mouse in our garden today. We have never been cat free beofre so I guess it cant beleive its luck. I was going to ask to borrow your cat but.....

Did the gecko try to sell you RV insurance?

Agreed, get rid of those poisoned rats. No need for that stuff to work its way up the food chain.

Awwww, that gecko is awfully darn cute. The gecko I wouldn't mind. You sound pretty calm, cool and collected about the mouse/rat. I don't know that I could be.

I'm a new reader, and I have to tell you, I am rather impressed by your self-sufficiency. It's given me something to think about.

Best wishes to you with your goals.

KoBold, I wrapped the mouse in many plastic bags and put him in the dumpster. Digging a hole around here is nearly impossible. The last poison rat was cheerfully eaten by the neighbor's dog last year when I first met him. Oops. He didn't seem to suffer any ill effects...well, it might have made him dumber.

Oh no Lizzie! He will tell his friends that you have a cat free yard! I am sorry my cat would not be any help. Perhaps if I quit feeding her but maybe not even then.

Oh Executioner...you slay me! I hope the gecko really was happy there. I would hate to find him floating later on. When I read about his normal habitat it didn't mention pools but then water is quite rare out here.

Welcome Petunia, glad you have stopped by. Rats are pretty common out here. They have chewed the wires of my old car, chewed the wires in the wall of my mobile home, died in my car, died under my mobile home(causing me to block the floor vents with cardboard, whew...smelly), but I draw the line at invading my RV! This is one habitat they will not ruin! It is a learning experience. Not always fun but it's interesting...at least to me.

Thanks for not posting a picture of the dead rat, lol!

The gecko is cute, though!

Good luck getting rid of the rodents.

I'm going to assert that your 3 inch corpse is most likely a mouse, unless you have tiny rats in your part of the world. I deal with rats where I live (Rattus norvegicus) and they have a 6 to 8 inch body attached to a tail almost as long as that. I'm laughing at the discussion about the photo -- when I first moved here I took a photos of the first few dead rats before I buried them. I gave that up once I realized how big my collection would become. At least my rats are all in the shed or under the deck, nothing in the house yet. Hope your rodents have gone away, never to return. I would also avoid poison -- snap traps are wicked efficient and enviro friendly.

Yes, Popular Girl, I looked it up and it was a common house mouse. That's good because the deer mice, not house mice are the ones that carry hantavirus around here. I also read that poison bait attracts them so I certainly don't want to be attracting them to my RV. I thought that they were gone but just tonight I heard some scampering in a different area under the RV. Bummer.