I am worried about the foul carpet odor but maybe it will go away when the carpets are dry. I hope it stays away for 30 days a least. If my new renters complain about a doggy smell I will feel bad for not replacing the carpets but I just don't have that kind of money right now. I got another carpet estimate today for the whole house, $2600.

So far I have spent $1,810 on labor and supplies. The painters and handyman should be finished tomorrow and then comes the next big money chore...shopping. I'm sure I could get things for a lot less money it I had the time but I don't have the time. I do want to go to the Habitat Store first. I might be able to find a TV stand, end tables, microwave and a vacuum for good prices.

Here's what was accomplished today:

-Bedroom door with hole in it, replacement complete.

-Carpets continued to be scrubbed.

-Driveway was scrubbed but it didn't help much. Too bad. The oil and tar stains look dirty.

-Kitchen linoleum was patched instead of replaced. I hope the repair works it looked like the edges were curling. That's not good. 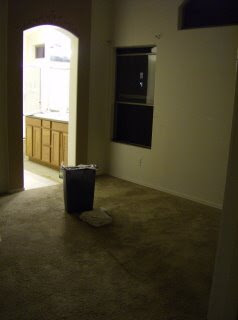 -Paint touch ups and repaints. I didn't want them to paint the whole wall if they didn't have too because I don't want the paint fumes to be overwhelming (but maybe they'll out-stink the dog smell. On the bright side...at least it doesn't smell like pot anymore.)

-Kitchen faucet replaced. I wish the handyman had bought a nicer faucet but I'm not going to be picky at this point. At least it works.

-I went to Big Lots to find mini-blinds to replace all of the one that are broken. They didn't have them anymore. Darn. I guess I'll have to go to Walmart. 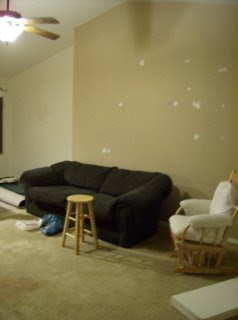 -I found a glider/rocker on craig's list for $50. I zoomed over at lunch and bought it. The old recliner was trashed and stained so this will replace it. Right now it's the best smelling piece of furniture in the house!

I had to go to the local cable tv office to get the cable turned on in my name. It turns out that the tenants didn't turn the cable off. I had to prove that I was the owner of the house in order to disconnect them and start it again. The cable company gives them 40 days to be late before they shut them off. Gee, the gas was shut off for non-payment, the electric was one day away from being shut off too, but the cable tv was going strong!

Then I called Qwest for the second day in a row and tried to convince them that I as indeed located in their service area. They didn't believe me again. I had Qwest internet last March! Oh well, I gave up and added cable internet instead. Now I need a cable modem. There's another $60 bucks I don't want to spend.

Tomorrow I should be able to start moving the furniture back in to the rooms and I'll get a better idea of what I need to buy. I can see steady progress every day...yea!
Posted by Daizy at 9:02 PM

Wow, I'm impressed with what you have been able to do in such as short time. How will you recover the costs?

Any reason why you are furnishing the apt?

I leave nothing but empty space in mine or things I don't care for much. I fully expect all my tenants to destroy or disrespect anything they have received for free.

I'm thinking the same thing as Chris L. Why do you rent it as furnished? Why not let them purchase and ruin their own stuff?

It's too bad some renters take advantage of homeowners. Hopefully, after your short term renters move out in March - you can find a good family to rent to. Have you thought of finding out where they moved to, and informing the new landlord of the conditions they left your place?

Geesh Maneesh! I vote on renting unfurnished. Oh wait, is this a vote? :)

It sounds like the carpets may need replacing. Pets is a very difficult smell to take out. Did you try sprinkling Baking Soda on the carpets and then vacuuming? Or maybe the pet store or hardware store has something specifically for that.


You are doing great.

I'll second the baking soda idea except that I would put a lot and wet it down then leave it until it's dry...then vacuum it up.

Looking and sounding a whole lot better. Still have my fingers and toes crossed for you.

Odoban spray for the carpets. Home Depot or Lowes.

if you put clay cat litter on the oil spots and rub it in to the pavement with a brick and leave it there for a while (particularly, through several rains, or soak it with water and then let it dry) the oil stain will largely get absorbed. Particularly if there's a rain, which tends to float surface oil up and into the grasp of the clay, which absorbs it.

Also, auto parts stores have stuff you can use. But I have used clay kitty litter and it works great. A detergent that breaks up the oil might be useful too--but I've always just used the kitty litter, straight.